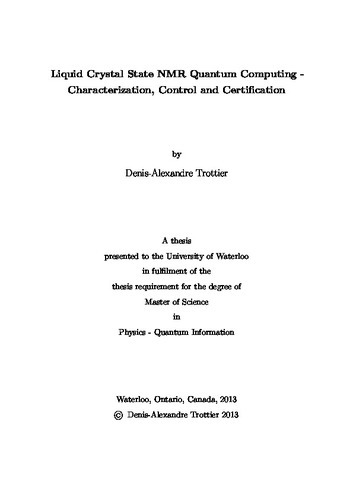 Quantum computers offer the possibility of solving some problems more efficiently than their classical counterparts. The current forerunner in the experimental demonstration of quantum algorithms is Nuclear Magnetic Resonance (NMR). Known for its implementations at liquid state, NMR quantum computing consists of computing on nuclear spins. In the liquid crystal state, dipolar couplings are available, offering an increased clock frequency and a faster recycling of algorithms. Here investigated is the cost at which this comes, namely, a more complicated internal Hamiltonian, making the system harder to characterize and harder to control. In this thesis I present new methods for characterizing the Hamiltonian of dipolar coupled spin systems, and I report experimental results of characterizing an oriented 6-spin system. I then present methods and results concerning the quantum optimal control of this same spin system. Finally, I present experiments and simulations regarding the certification of computational quantum gates implemented in that same dipolar coupled spin system.