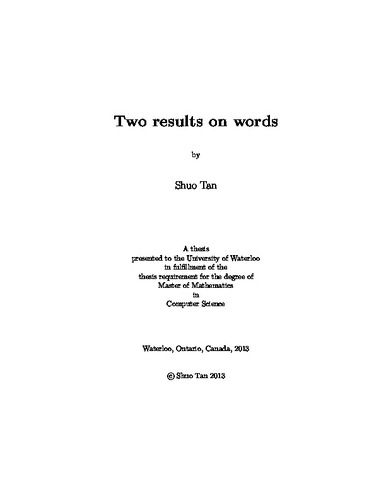 The study of combinatorial patterns of words has raised great interest since the early 20th century. In this master's thesis presentation we study two combinatorial patterns. The first pattern is “abelian k-th power free” and the second one is “representability of sets of words of equal length”. For the first pattern we study the context-freeness of non-abelian k-th powers. A word is a non-abelian k-th power if it cannot be factorized in the form w1w2...wk where the wi are permutations of w1 for 2 ≤ i ≤ k. We show that neither the language of non-abelian squares nor the language of non- abelian cubes is context-free. For the second pattern we study the representability of a set of words of fixed length. A set S of words of length n is representable if there exists some word w such that the set of length-n factors of w equals S. We will give lower and upper bounds for the number of such representable sets. Furthermore, we study a variation of the problem: we fix a length t, and try to evaluate the number of sets of words of length n such that there exists some word w of length t such that the set of length-n factors of w equals S. We give a closed-form formula in the case where n ≤ t < 2n. In particular, we give a characterization on two distinct words having the same subset of length-n factors.