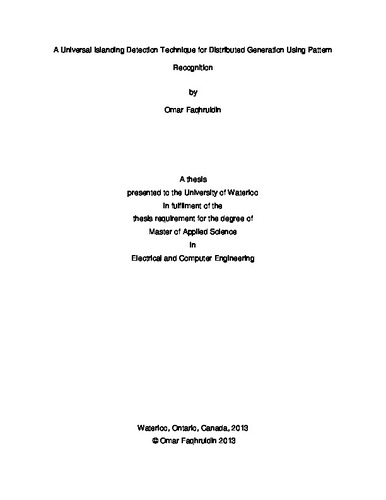 In the past, distribution systems were characterized by a unidirectional power flow where power flows from the main power generation units to consumers. However, with changes in power system regulation and increasing incentives for integrating renewable energy sources, Distributed Generation (DG) has become an important component of modern distribution systems. However, when a portion of the system is energized by one or more DG and is disconnected from the grid, this portion becomes islanded and might cause several operational and safety issues. Therefore, an accurate and fast islanding detection technique is needed to avoid these issues as per IEEE Standard 1547-2003 [1]. Islanding detection techniques are dependent on the type of the DG connected to the system and can achieve accurate results when only one type of DG is used in the system. Thus, a major challenge is to design a universal islanding technique to detect islanding accurately and in a timely manner for different DG types and multiple DG units in the system. This thesis introduces an efficient universal islanding detection method that can be applied to both Inverter-based DG and Synchronous-based DG. The proposed method relies on extracting a group of features from measurements of the voltage and frequency at the Point of Common Coupling (PCC) of the targeted island. The Random Forest (RF) classification technique is used to distinguish between islanding and non-islanding situations with the goals of achieving a zero Non-Detection Zone (NDZ), which is a region where islanding detection techniques fail to detect islanding, as well as avoiding nuisance DG tripping during non-islanding conditions. The accuracy of the proposed technique is evaluated using a cross-validation technique. The methodology of the proposed islanding detection technique is shown to have a zero NDZ, 98% accuracy, and fast response when applied to both types of DGs. Finally, four other classifiers are compared with the Random Forest classifier, and the RF technique proved to be the most efficient approach for islanding detection.