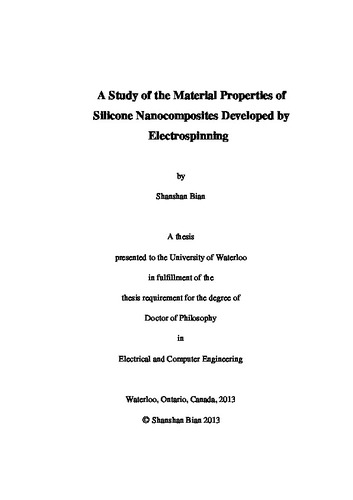 The current thrust towards the compaction of electrical power equipment, resulting in increased insulation electrical stress levels, necessitates new electrical insulating materials. In the last few decades, polymeric materials that exhibit light weight, excellent mechanical properties, low cost, and some with unique non-wetting surface characteristics, have surpassed the use of the conventional porcelain and glass insulating materials. Despite these advantages, polymeric materials are incapable of withstanding the high heat from surface arcing that is instigated by the synergism of pollution, moisture, and voltage. Surface arcing results in material loss due to heat ablation and/or the electrical tracking of polymeric materials. To overcome such issues, inorganic fillers are added to the base polymers to enhance their resistance to surface discharge activities and other performances. Since their addition can significantly reduce material costs, their use is compelling. Micron-sized fillers, here after defined as microfillers, have been used to acquire these desirable properties, but due to limitations in material processability, the further application of such fillers is limited. Consequently, nano-sized fillers, here after defined as nanofillers, have been viewed as replacements or assistant combinations to microfillers. Nanofillers are characterized by large surface areas, resulting in increased bond strengths that yield significant improvements in the various properties at fill levels well below that of microfillers. However, the primary problem of using nanofillers is their characteristic property of agglomeration due to their physical size and the forces between the fillers. Conventional mechanical mixing of nanofillers does not adequately separate the nanofillers, leading to behaviour similarly to that of microfillers. Therefore, the implementation of nanofillers is not completely effective. In chemical dispersion techniques, for example, the use of surfactants, are normally very elaborate and complicated. Due to the negative impact of agglomeration, the successful dispersion of nanofillers is pivotal in the further development of nanodielectrics for various insulation applications. In this thesis, electrospinning is proposed and realized as a new dispersal method for nanofillers in polymeric materials. This novel technique facilitates polymeric nanocomposites with improved properties due to the uniform distribution of fillers. Scanning electron microscopy (SEM) images and energy dispersive X-ray analysis (EDX) clearly indicate that electrospun nanocomposites demonstrate a better filler distribution than nanocomposites, produced by conventional mechanical mixing. Also electrospinning introduces the possibility of separating different nanofillers in different base polymers. The mechanical properties: tensile strength and hardness; the electrical properties: permittivity, tracking, and erosion resistance; and the thermal properties: thermal conductivity, thermal degradation, and heat erosion resistance of electrospun nanocomposites are compared to those of conventional nanocomposites for silicone rubber and cycloaliphatic epoxy-based polymers. All the experimental studies in this thesis confirm that electrospun nanocomposites exhibit better thermal performances than the conventional composites which are attributed to the improved distribution of the nanofillers by the newly developed electrospinning process. Also in this investigation, a two-dimensional thermal model is developed in COMSOL MultiphysicsTM by using the finite element method (FEM) to theoretically address the benefits of using nanofillers and the effects of filler dispersion. The model confirms that electrospun nanocomposites have much more uniform temperature distribution than conventional nanocomposites. This thesis presents the possible mechanisms by which nanofillers improve the heat and erosion resistance of silicone rubber nanocomposites, and also addresses the possible mechanism by which electrospinning improves nanofiller dispersion.

Shanshan Bian (2013). A Study of the Material Properties of Silicone Nanocomposites Developed by Electrospinning. UWSpace. http://hdl.handle.net/10012/7783