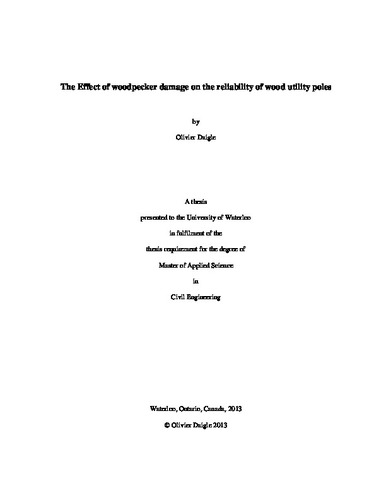 Hydro One, a major distribution of electricity in Ontario, has reported that approximately 16,000 of the wood utility poles in its network of two million poles have been damaged by woodpeckers. With a cost of replacement of approximately $4000 per pole, replacing all affected poles is an expensive enterprise. Previous research conducted at UW attempted to quantify how different levels of woodpecker damage affected the pole strength. In the course of this research, some shear failures were observed. Utility poles being slender cantilevered structures, failures in shear are not expected. The objectives of this study were to determine the effective shear strength of wood utility poles and to determine the reliability of wood utility poles under different configurations, including poles that had been damaged by woodpeckers. An experimental programme was developed and conducted to determine the effective shear strength of wood poles. Red Pine wood pole stubs were used for this purpose. The stubs were slotted with two transverse half-depth cuts parallel to one another but with openings in opposite directions. A shear plane was formed between these two slots. The specimens were loaded longitudinally and the failure load was recorded and divided by the failure plane area to determine the shear strength. The moisture content of each specimen was recorded and used to normalize each data point to 12 % moisture content. The experimental study showed that the mean shear strength of the Red Pine specimens adjusted to 12 % moisture content was 2014 kPa (COV 47.5 %) when calculated using gross shear area, and 2113 kPa (COV 40.5 %) when calculated using net area. The shear strength of full-size pole specimens can be represented using a log-normal distribution with a scale parameter of λ = 0.5909 and a shape parameter of ζ = 0.5265. iii The reliability of Red Pine wood utility poles was determined analytically. A structural analysis model was developed using Visual Basic for Applications in Excel and used in conjunction with Monte Carlo simulation. Statistical distribution parameters for wind loads and ice accretion for the Thunder Bay, Ontario region were obtained from literature. Similarly, statistical data were obtained for the modulus of rupture and shear strength from previous research conducted at UW as well as the experimental programme conducted in this research. The effects of various properties on reliability were tested parametrically. Tested parameters included the height of poles above ground, construction grade, end- of-life criterion, and various levels of woodpecker damage. To evaluate the results of the analysis, the calculated reliability levels were compared to the annual reliability level of 98 % suggested in CAN/CSA-C22.3 No. 60826. Results of this reliability study showed that taller poles tend to have lower reliability than shorter ones, likely due to second-order effects having a greater influence on taller poles. The Construction Grade, a factor which dictates the load factors used during design, has a significant impact on the reliability of wood utility pole, with poles designed using Construction Grade 3 having a reliability level below the 98 % threshold. Poles designed based on Construction Grade 2 and 3 having reached the end-of-life criterion (60 % remaining strength) had reliability below this threshold whilst CG1-designed pole reliability remained above it. Wood poles with exploratory- and feeding-level woodpecker damage were found to have an acceptable level of reliability. Those with nesting-level damage had reliability below the suggested limits. Poles with feeding and nesting damage showed an increase in shear failure. The number of observed shear failure depended on the orientation of the damage. Woodpecker damage with the opening oriented with the neutral axis (i.e., the opening perpendicular to the direction of loading) produced a greater number of shear failure compared to woodpecker damage oriented with the extreme bending fibres.

Olivier Daigle (2013). The Effect of Woodpecker Damage on the Reliability of Wood Utility Poles. UWSpace. http://hdl.handle.net/10012/7782