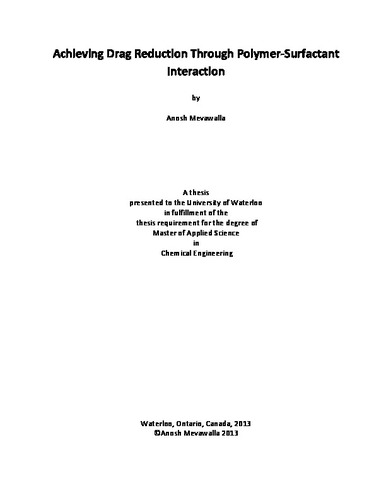 Drag reduction is a well-observed phenomenon, it was first observed by the British chemist Toms in 1946, yet its mechanism is still unknown to this day. Polymer Drag reduction has found application in reducing pumping costs for oil pipelines (its use in the Trans Alaska Pipeline has resulted in an increase from 1.44 million bbl./day to 2.1356 million bbl./day), increasing the flow rate in firefighting equipment , and in supporting irrigation and drainage systems. Surfactant drag reducers are used industrially in district heating and cooling systems. Though the fields of Surfactant Drag Reduction and Polymer Drag Reduction are each independently well-developed the effect of their interaction on drag reduction is a less explored phenomenon. Through a well chosen pairing of surfactant and polymer, drag reduction can be maximized while minimizing surfactant and polymer concentrations cutting down on cost and environmental impact. The focus of this work was to determine if there was any positive interaction between the polymers Polyethylene Oxide (PEO) and Anionic PolyAcrylAmide (PAM) and the surfactant Amphosol CG (Cocamidopropyl Betaine) as well as any interaction between the polymers themselves. Both polymers are popular drag reducers while Amphosol is a practically nontoxic (LD50=5g/kg) zwitterionic surfactant and is readily biodegradable. In order to determine if any interaction was present and at what concentration was this most notable 4 techniques were used: Surface tension, Conductivity, Relative Viscosity and Shear Viscosity measurement. From this analysis the polymer Saturation point (PSP), Critical aggregation concentration (CAC) and Critical micelle concentration (CMC) were found as well as the concentrations that optimized the viscosity for the pilot plant runs. The bench scale results were used to pick the optimum concentrations for the polymer surfactant solutions. Pressure readings and flowrate measurements were used to plot the Fanning Friction Factor against the Generalized Reynolds Number for the surfactant polymer mixtures and compared to their pure polymer and surfactant counterparts. The Blasius line was found to hold for water measurements taken and is the base to determine percentage drag reduction. The effect of the presence of amphosol on degradation and overall drag reduction were noted. Other factors considered were pipe diameter and the effect of ionic impurities in the solvent.