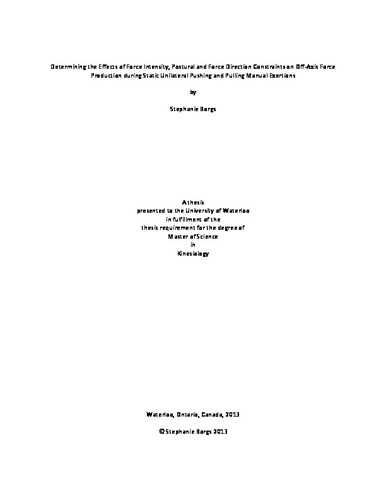 Proactive ergonomics is generally considered to be a more efficient and cost effective way of designing working environments than reactive ergonomics. It often requires preemptively selecting working postures and forces to reduce potential injury risk. One major issue with proactive ergonomic design is correctly identifying the true manual forces that will be required of a worker to complete defined tasks. Typically, these forces are represented as in direct opposition to the forces required by a particular task. However, this is likely an oversimplification as forces often act in different directions than the task-required direction to increase required force level, enhance balance and reduce joint moments, depending on specific experimental conditions. This study aims to quantify these off-axis forces as they change with different required on-axis force intensities. This thesis evaluated the effects of force intensity on the presence of off-axis forces across four conditions, which included free and constrained postures, and with and without off-axis force. Eighteen female subjects performed static, unilateral, manual pushing and pulling exertions while seated and were limited to force contributions from the right upper extremity. Hand forces and location of bony landmarks were collected from each subject and force intensity consisted of both maximal and submaximal levels (5% to 50% of the maximum producible on-axis force in increments of 5%). All principle direction forces were scaled to the on-axis force level and anatomically relevant joint moments scaled to the maximum capacity joint moment. The main objective of this study was to analyze off-axis force production as force intensity was increased under various constraint conditions. The highest maximum on-axis force was in the fully free condition (off-axis force allowed and posture unconstrained) and as conditions became more constrained for both pushing and pulling exertions, maximum on-axis force production decreased (p=<0.0001). For submaximal exertions in the free posture, participants used off-axis forces to target the shoulder flexion-extension moment by pushing increasingly upwards (p=0.0122) and to the left by 5.6% on-axis (p=0.0025), and by pulling 12.6% on-axis downward (p=<0.0001) and 4.7% on-axis rightward (p=0.0024) compared to when off-axis force was not allowed. When comparing the free to the constrained posture while allowing off-axis force, participants pushed downwards instead of upwards by a difference of 12.9% on-axis (p=0.0002) and pulled less downward (becoming slightly upward) by an increasing difference (p=0.0002) and from decreasing to increasing rightward (p=0.0006). These changes in off-axis force showed a unifying strategy of using less shoulder flexion-extension strength by targeting wrist and elbow moments for pushing and pulling exertions. When in the constrained posture allowing and not allowing off-axis force resulted in more internal elbow flexion (p=0.0003) moment during pushing, and less internal shoulder flexion (p=0.0092), more internal shoulder adduction (p=0.0252), more to less internal elbow supination (p=0.0415), and increasingly less internal wrist flexion (p=0.0296) moments during pulling, which verified previously observed strategies. Finally, for both maximal and submaximal exertions, pulling was more sensitive to changes in off-axis forces compared to pushing which was more sensitive to postural flexibility. In conclusion, the underlying principles as to how and why off-axis forces change provides valuable knowledge to ergonomists so that they can more accurately predict force production in workplace design, ultimately reducing the potential for injury.