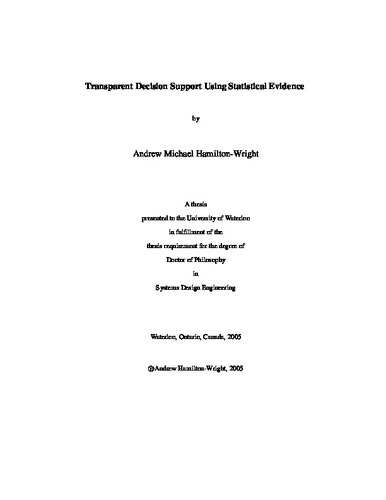 An automatically trained, statistically based, fuzzy inference system that functions as a classifier is produced. The hybrid system is designed specifically to be used as a decision support system. This hybrid system has several features which are of direct and immediate utility in the field of decision support, including a mechanism for the discovery of domain knowledge in the form of explanatory rules through the examination of training data; the evaluation of such rules using a simple probabilistic weighting mechanism; the incorporation of input uncertainty using the vagueness abstraction of fuzzy systems; and the provision of a strong confidence measure to predict the probability of system failure. <br /><br /> Analysis of the hybrid fuzzy system and its constituent parts allows commentary on the weighting scheme and performance of the "Pattern Discovery" system on which it is based. <br /><br /> Comparisons against other well known classifiers provide a benchmark of the performance of the hybrid system as well as insight into the relative strengths and weaknesses of the compared systems when functioning within continuous and mixed data domains. <br /><br /> Classifier reliability and confidence in each labelling are examined, using a selection of both synthetic data sets as well as some standard real-world examples. <br /><br /> An implementation of the work-flow of the system when used in a decision support context is presented, and the means by which the user interacts with the system is evaluated. <br /><br /> The final system performs, when measured as a classifier, comparably well or better than other classifiers. This provides a robust basis for making suggestions in the context of decision support. <br /><br /> The adaptation of the underlying statistical reasoning made by casting it into a fuzzy inference context provides a level of transparency which is difficult to match in decision support. The resulting linguistic support and decision exploration abilities make the system useful in a variety of decision support contexts. <br /><br /> Included in the analysis are case studies of heart and thyroid disease data, both drawn from the University of California, Irvine Machine Learning repository.