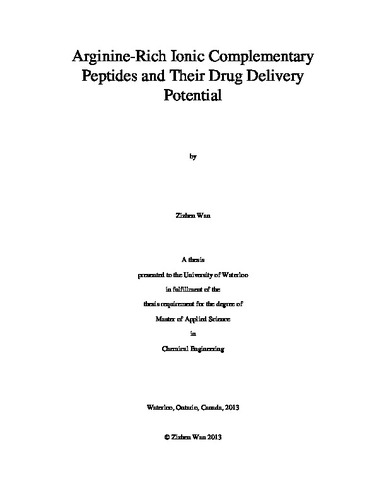 Ellipticine (EPT), a natural plant polyphenolic compound, has long been known for its significant anticancer and anti-HIV activities. Recent study on its photophysical properties has revealed that ellipticine has three molecular states: protonated, neutral and crystalline. Further in vitro cytotoxicity tests indicated that protonated ellipticine exhibited much higher anticancer activity than the other two states. To maximize drug therapeutic effect, a small library of ariginine-rich ionic complementary peptides derived from EAK, including EAR8-II, EAR8-a, ELR8-a, and EAR16-II, were investigated as a potential carrier to deliver prescribed protonated ellipticine for treatment of cancer. Fluorescence study demonstrated that all four peptides were able to solubilize and stabilize protonated ellipticine in aqueous solution at 5:1 mass ratio of peptide-to-ellipticine (0.5: 0.1 mg/mL) even upon 4000 times dilution. Physicochemical characteristics of peptides self-assemblies and peptide-ellipticine complexes such as particle size, surface charge, secondary structure and morphology were determined by dynamic light scattering (DLS), zeta potential, circular dichroism (CD) , atomic force microscopy (AFM) and transmission electron microscopy (TEM), respectively. Then the ellipticine maximum suspension was determined by ellipticine UV-absorption. With the help of the peptides and mechanical stirring overtime, up to 100% ellipticine could be uptaken and stabilized in the solution as protonated ellipticine. In vitro cytotoxicity tests indicated that the peptides were demonstrating significant biocompatibility without affecting the survival of two cancer cell lines, human lung carcinoma cell line A549 and breast cancer cell line MCF-7, whereas the complexes with protonated ellipticine were found to show great anticancer activity to the two cancer cell lines. The IC50 values were obtained for each of four different peptide-ellipticine complexes ranged from 0.36±0.12 to 18.90±0.46 μM. It is worth noting that the IC50 value of EAR16-ellipticine complex to MCF-7 was over 50 times higher than that one to A549, which presented that EAR16-ellipticine complex has a selective targeting activity to A549, with the lowest IC50 value of 0.36±0.12 μM among all four complexes. Such a result indicated that this library of novel arginine-rich ionic complementary peptides had a great potential to encapsulate prescribed protonated ellipticine and exhibited an excellent anticancer activity upon serial dilution in aqueous solution. Overall, the charge distribution and increased hydrophobicity of the short (8 amino acids length) peptides seemed not to affect the complex formation and its therapeutic efficacy in vitro; however, the increase in length of the peptides significantly altered the nanostructure of peptides and its complexation with ellipticine, increased the therapeutic efficacy of EAR16-EPT to A549. This work provides essential information for peptide sequence design in the development of self-assembling peptide-based delivery of hydrophobic anticancer drugs.