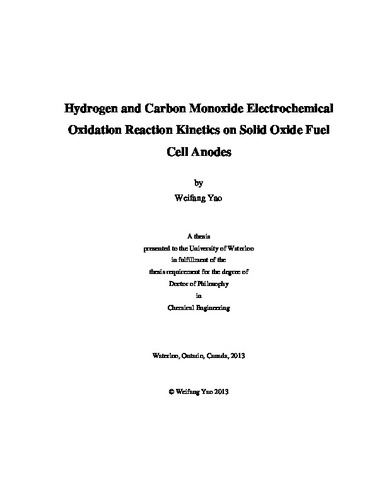 Solid oxide fuel cells (SOFCs) are promising power generation devices due to its high efficiency and low pollutant emissions. SOFCs operate with a wide range of fuels from hydrogen (H2) to hydrocarbons, and are mainly intended for stationary power generation. Compared to combustion systems, SOFCs have significantly lower environmental impacts. However, the full scale commercialization of SOFCs is impeded by high cost and problems associated with long-term performance and durability. The cell performance can be affected by various internal losses, involving cathode, anode and electrolyte. Anodic losses make a significant contribution to the overall losses, practically in anode-supported cells. Therefore, it is desirable to reduce the anodic losses in order to enhance the overall cell performance. Knowledge of the actual elementary reaction steps and kinetics of electrochemical reactions taking place on the anode is critical for further improvement of the anode performance. Since H2 and carbon monoxide (CO) are the primary reforming products when hydrocarbons are used as SOFC fuels, investigation of electrochemical reactions involving H2 and CO should provide a better understanding of SOFC electrochemical behavior with hydrocarbon feeds. However, still exist uncertainties concerning both H2 and CO electrochemical reactions. The overall objective of this research is to investigate the mechanistic details of H2 and CO electrochemical reactions on SOFC anodes. To achieve this objective, Ni/YSZ pattern anodes were used in the experimental study and as model anodes for the simulation work due to their simplified 2-D structure. The Ni/YSZ pattern anodes were fabricated using a bi-layer resist lift-off method. Imaging resist nLOF2035 and sacrificial resist PGMI SF11 were found to be effective in the bi-layer photolithographic process. Suitable undercut size was found critical for successful pattern fabrication. A simple method, involving taking microscopic photographs of photoresist pattern was developed, to check if the undercut size is large enough for the lift-off; semi-circle wrinkles observable in photographs indicate whether the undercut is big enough for successful pattern anode fabrication. The final product prepared by this method showed straight and clear Ni patterns. A systematic study was performed to determine the stable conditions for Ni/YSZ pattern anode performance. The microstructure and electrochemical behavior changes of the pattern anode were evaluated as a function of Ni thickness, temperature and H2O content in H2 environment. Ni/YSZ pattern anodes with 0.5 µm thick Ni were tested in dry H2 at 550°C without significantly changing the TPB line. Ni/YSZ pattern anodes with Ni thickness of 0.8 µm were tested at 550°C under dry and humidified H2 (3-70% H2O) conditions without TPB line change. For 0.8 µm thick patterns, the TPB length showed pronounced changes in the presence of H2 with 3-70% H2O at 700°C. Significant increase in TPB length due to hole formation was observed at 800°C with 3% and 10% H2O. Ni/YSZ pattern anodes with 1.0 µm thick Ni were stable in H2 with 3% H2O in the range 500-800°C, with only slight changes in the TPB line. Changes of TPB line and Ni microstructure were observed in the presence of 3-70% H2O above 700C. Stabilization of the pattern anode performance depends on temperature. To accelerate stabilization of the cell, pre-treatment of the cell in H2 with 3% H2O for ~22 hrs at 750°C or 800°C could be performed. In addition, comprehensive data sets for H2 and CO electrochemical oxidation reactions on Ni/YSZ pattern anodes were obtained under stable test conditions. For the H2/H2O system, the polarization resistance (Rp) increases as temperature, overpotential, H2 partial pressure, TPB length decreases. Rp is also dependent on H2O content. When the H2O content is between 3% and 30-40%, Rp decreased with increasing H2O content. However, Rp is less affected with further increases in H2O content. For the CO/CO2 system, polarization resistance depends on partial pressure of CO and CO2, temperature and overpotential. Moreover, the polarization resistance decreases when the partial pressure of CO2 and temperature increase. The partial pressure of CO has a positive effect on the polarization resistance. The polarization resistance decreases to a minimum when the overpotential is 0.1 V. For both H2 and CO electrochemical oxidations, charge transfer reactions contribute to the rate limiting steps. A 1-D dynamic SOFC half-cell model considering multiple elementary reaction kinetics was developed. The model describes elementary chemical reactions, electrochemical reactions and surface diffusion on Ni/YSZ pattern anodes. A new charge transfer reactions mechanism proposed by Shishkin and Ziegler (2010) based on Density Functional Theory (DFT) was investigated through kinetic modeling and pattern anode experimental validation. This new mechanism considers hydrogen oxidation at the interface of Ni and YSZ. It involves a hydrogen atom reacting with the oxygen ions bound to both Ni and YSZ to produce hydroxyl (charge transfer reaction 1), which then reacts with the other hydrogen atom to form water (charge transfer reaction 2). The predictive capability of this reaction mechanism to represent our experimental results was evaluated. The simulated Tafel plots were compared with our experimental data for a wide range of H2 and H2O partial pressures and at different temperatures. Good agreements between simulations and experimental results were obtained. Charge transfer reaction 1 was found to be rate-determining under cathodic polarization. Under anodic polarization, a change in rate-limiting process from charge transfer reaction 1 to charge transfer reaction 2 was found when increasing the H2O partial pressure. Surface diffusion was not found to affect the H2 electrochemical performance.