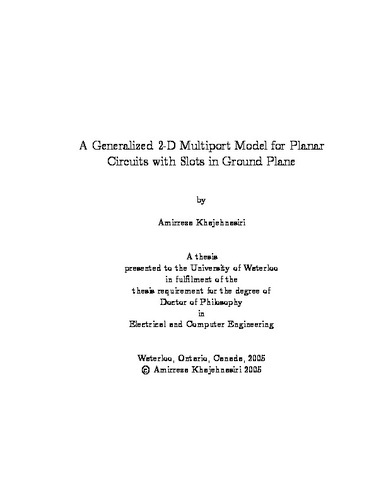 With increasing complexity of microwave integrated circuits and tendency towards building integrated modules, real estate in printed circuit boards becomes more at premium. On the other hand, building MIC's on a single semiconductor substrate such as GaAs has other drawbacks as substrate requirements for different components are sometimes contradictory. This has motivated researchers to consider multi-layer and stacked designs. Multi-layer planar circuits offer advantages that cannot be equaled by traditional single layer designs. In this respect, a new class of planar structures, based upon a multi-layered stack of dual-mode stripline or microstrip patches is becoming increasingly popular. In the new stacked design coupling between planar circuits separated by a ground plane is accomplished through coupling apertures in the common ground plane. <br ><br /> This thesis is about developing a new approximate multiport network model for fast analysis of multi-layered planar structures with ground plane slots. To extend applicability of multiport network model (MNM) to the class of planar structures containing ground plane slots, a generalized network formulation for aperture problems is combined with traditional MNM to account for the presence of the slot. To this end, the slot is replaced by an unknown equivalent surface magnetic current. Slot ports are defined in terms of electric and magnetic fields over the slot in accordance with the generalized network formulation for aperture problems. While traditional MNM for planar circuits is based on generalized impedance matrices, we adopt a hybrid matrix approach for multi-layer structures. The hybrid matrix consists of four sub-matrices that relate terminal voltages and currents of edge and slot ports. The same generalized impedance matrix in the absence of the slot can be used to relate terminal voltages and currents of edge ports when the slot ports are short-circuited. Open circuit voltage at edge ports due to terminal voltages at slot ports and terminal currents at slot ports due to input currents at edge ports are represented by two transfer matrices. Both these transfer matrices can be calculated from 2D analysis which only considers <em>TM<sup>z</sup></em> modes. <br ><br /> Interaction among slot ports, represented by a generalized admittance matrix, however, requires considering both <em>TM<sup>z</sup></em> and <em>TE<sup>z</sup></em> modes. This generalized admittance matrix is obtained from tangential component of the magnetic field over the slot due to the equivalent surface magnetic current and relates terminal voltages and currents of slot ports. Full modal expansion consisting of both <em>TM<sup>z</sup></em> and <em>TE<sup>z</sup></em> modes is used to compute the generalized admittance matrix of a slot in a regularly shaped planar cavity. For irregularly shaped patches, modal expansion is not available. Instead, a new contour integral equation for magnetic field, derived for the first time in this thesis, is combined with complex images method for calculation of generalized admittance matrix of a slot radiating in a planar cavity of arbitrary shape. <br ><br /> Once the hybrid matrix representation of a planar circuit on a ground plane containing a slot is derived, it can be connected to the hybrid matrix of any other planar circuit on the other side of the ground plane. This can be done by enforcing network equivalent of continuity of tangential fields across the slot. This leads to a generalized impedance matrix for the multi-layer structure relating terminal voltages and currents of edge ports of both planar circuits. <br ><br /> To show the accuracy of the proposed method of analysis, several proof-of-concept structures have been analyzed by both this method and ANSOFT HFSS full-wave simulator as a reference. In most cases excellent agreement is achieved in predicting the return loss and radiation patterns of these multi-layer structures which proves the validity of the proposed approach for fast analysis and design of multi-layer planar structures.