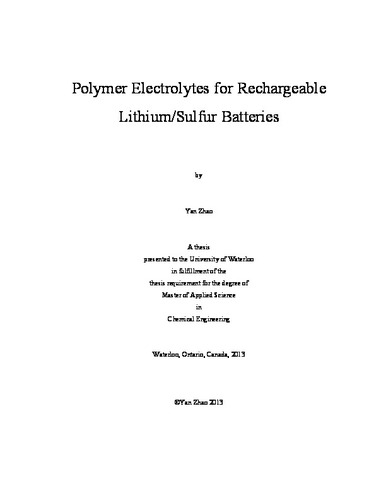 With the rapid development of portable electronics, hybrid-electric and electric cars, there is great interest in utilization of sulfur as cathodes for rechargeable lithium batteries. Lithium/sulfur batteries implement inexpensive, the earth-abundant elements at the cathode while offering up to a five-fold increase in energy density compared with the present Li-ion batteries. However, electrically insulating character of sulfur and solubility of intermediate polysulfides in organic liquid electrolytes, which causes rapid capacity loss upon repeated cycling, restrict the practical application of Li/S batteries. In this thesis, the gel polymer and solid polymer electrolytes were synthesized and applied in Li/S batteries. A gel polymer electrolyte (GPE) was formed by trapping 1 M lithium bistrifluoromethane-sulfonamide (LiTFSI) in tetraethylene glycol dimethyl ether (TEGDME) electrolyte in a poly(vinylidenefluoride-co-hexafluoropropylene) (PVDF-HFP) /poly(methylmethacrylate) (PMMA) polymer matrix. The electrochemical properties of the resulting GPE were investigated in lithium/sulfur battery. The gel polymer battery exhibited a high specific capacity of 753.8 mAh gˉ¹ at the initial cycle, stable reversible cycling and a capacity retention about 80% over 40 cycles along with a high Coulombic efficiency. Comparative studies conducted with the 1 M LiTFSI liquid electrolyte cell demonstrated that a cell with liquid electrolyte has remarkably low capacity retention and Coulombic efficiency compared with the GPE cell. In the further studies, a solid polymer electrolyte (SPE) based on poly- (ethylene-oxide)/nanoclay composite was prepared and used to assemble an all-solid-state lithium/sulfur battery. The ionic conductivity of the optimized electrolyte has achieved about 3.22×10ˉ¹ mS cmˉ¹ at 60 °C. The Li/S cell with this SPE delivered an initial discharge capacity of 998 mAh gˉ¹ when operated at 60 °C, and retained a reversible capacity of 634 mAh gˉ¹ after 100 cycles. These studies has revealed that the electrochemical performance of lithium/sulfur cells, including charge-discharge cyclability and Coulombic efficiency, can be significantly improved by replacing liquid electrolytes with solid polymer and gel polymer electrolytes, which reduce the polysulfide shuttle effect and could protect the lithium anode from the deposition of the electrochemical reaction, leading to higher sulfur utilization in the cell.