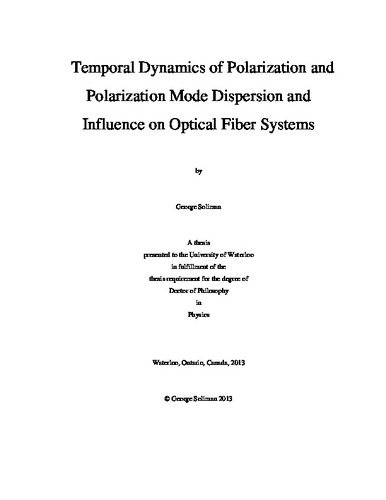 This thesis examines polarization and polarization mode dispersion (PMD) dynamics in optical fibers as well as the evaluation of probability density functions and bit error rates in a realistic wavelength division multiplexed (WDM) optical communication systems. In the first part of the thesis, experimental studies of the dynamics of polarization in a dispersion compensation module (DCM) are performed in which mechanical shocks are imparted to several different DCMs by dropping a steel ball on the outer casing at different locations and from different heights and the resulting rapid polarization fluctuations are measured. We provide a theoretical model that accounts for the dynamic birefringence generated due to the impact. Next, an experimental technique is proposed to detect the location of temporal polarization activity in WDM systems. It is demonstrated theoretically and in simulations that measurement of both the PMD vector and the Stokes parameters at the WDM frequencies enables the detection of the location of such activity. Different linear prediction procedures are applied to the differential group delay of an optical fiber link assumed to obey the hinge model. The hinges are modeled as polarization rotators with fixed rotation axes and sinusoidally varying rotation angles. Three prediction methods are investigated and consequently compared: an autoregressive model (AR) with Kalman filter, a pattern imitation method and a Taylor expansion technique. The effect of measurement noise on the prediction horizon is also investigated for each prediction method. Using a physically reasonable stochastic model for the hinges, we derive analytical expressions for the temporal autocorrelation functions of the state of polarization (SOP) and the PMD vector. The obtained analytical results are compared to simulations. Finally, we apply the multicanonical method to the probability density function of received symbols and the symbol error ratio (SER) in a dual polarization quadrature phase shift keyed (DP-QPSK) WDM system. We simulate five co propagating channels at a symbol rate of 10.7 GBaud/s and account for PMD and nonlinear effects. We evaluate the performance of the system for two different cases: single mode fibers with full dispersion compensation at the end of the link, effective large area fibers (LEAF) with full dispersion compensation at the end of the link.