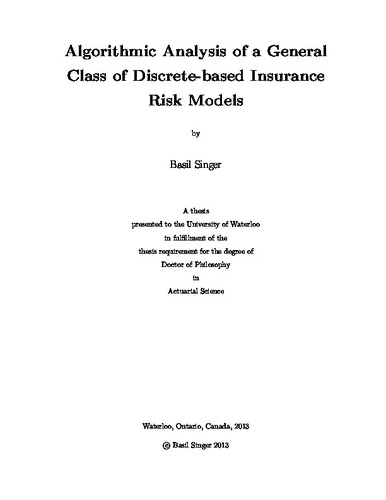 The aim of this thesis is to develop algorithmic methods for computing particular performance measures of interest for a general class of discrete-based insurance risk models. We build upon and generalize the insurance risk models considered by Drekic and Mera (2011) and Alfa and Drekic (2007), by incorporating a threshold-based dividend system in which dividends only get paid provided some period of good financial health is sustained above a pre-specified threshold level. We employ two fundamental methods for calculating the performance measures under the more general framework. The first method adopts the matrix-analytic approach originally used by Alfa and Drekic (2007) to calculate various ruin-related probabilities of interest such as the trivariate distribution of the time of ruin, the surplus prior to ruin, and the deficit at ruin. Specifically, we begin by introducing a particular trivariate Markov process and then expressing its transition probability matrix in a block-matrix form. From this characterization, we next identify an initial probability vector for the process, from which certain important conditional probability vectors are defined. For these vectors to be computed efficiently, we derive recursive expressions for each of them. Subsequently, using these probability vectors, we derive expressions which enable the calculation of conditional ruin probabilities and, from which, their unconditional counterparts naturally follow. The second method used involves the first claim conditioning approach (i.e., condition on knowing the time the first claim occurs and its size) employed in many ruin theoretic articles including Drekic and Mera (2011). We derive expressions for the finite-ruin time based Gerber-Shiu function as well as the moments of the total dividends paid by a finite time horizon or before ruin occurs, whichever happens first. It turns out that both functions can be expressed in elegant, albeit long, recursive formulas. With the algorithmic derivations obtained from the two fundamental methods, we next focus on computational aspects of the model class by comparing six different types of models belonging to this class and providing numerical calculations for several parametric examples, highlighting the robustness and versatility of our model class. Finally, we identify several potential areas for future research and possible ways to optimize numerical calculations.