Charting the path from self-reflection to self-appraisal in social anxiety: What are the roles of self-immersion and self-distancing? 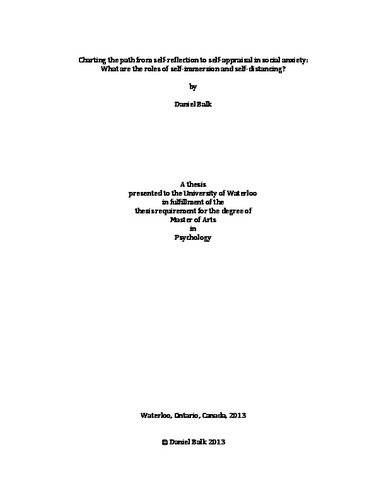 Past studies have suggested that individuals who adopt a psychologically immersed, as opposed to a psychologically distanced perspective when reflecting on negative emotional experiences, tend to experience greater negative affect and have more difficulty reappraising their experiences in an objective manner. Psychological distancing and immersion have not been studied systematically in socially anxious (SA) individuals, despite previous research showing that trait social anxiety is strongly associated with negatively biased appraisals of social experiences during self-reflection and post-event processing. The current study investigated the relationship between trait social anxiety, psychological immersion, and the cognitive and affective experiences of 76 participants while they engaged in a laboratory-based social task. Participants wrote about and reflected on a recent negative experience in which something they did or said in a social situation did not turn out the way they thought it should have. Thereafter, participants imagined an upcoming social interaction in which they believed they would be judged on their ability to impress a social partner. Participants were randomly assigned to one of two conditions in which they were instructed to self-reflect on these experiences in a distanced or immersed manner. Participants completed self-report measures of affect (Positive and Negative Affect Schedule), subjective distress (SUDS), cognitions (Negative Self Portrayal Scale), and psychological immersion (Five Facets of Mindfulness Questionnaire) at several time points during the study. Although there were no significant effects of condition in the primary analyses, secondary analyses demonstrated that psychological immersion was significantly correlated with higher negative and lower positive affect, and with greater self portrayal concerns (but only for the social anticipation task), accounting for unique and significant variance in these outcomes, over and above the variance accounted for by trait SA. Moreover, there was a significant interaction between psychological distancing and SA status during the social anticipation self-reflection task, such that high SA participants experienced significantly greater negative affect than their low SA counterparts, but only at high levels of self-immersion. At low levels of self-immersion, both high and low SA participants reported comparatively low levels of negative affect. These results suggest that individual differences in psychological immersion and distancing may help to explain the circumstances under which self-reflection could have detrimental affective and cognitive consequences. In particular, high levels of self-immersion during self-reflection appear to interact with high levels of trait SA to drive negative emotional responses and beliefs within social contexts. Implications of these preliminary findings, their limitations, and ideas for future research are discussed within the context of cognitive behavioural models of SA.

Daniel Balk (2013). Charting the path from self-reflection to self-appraisal in social anxiety: What are the roles of self-immersion and self-distancing?. UWSpace. http://hdl.handle.net/10012/7747