Space-Efficient Data Structures in the Word-RAM and Bitprobe Models 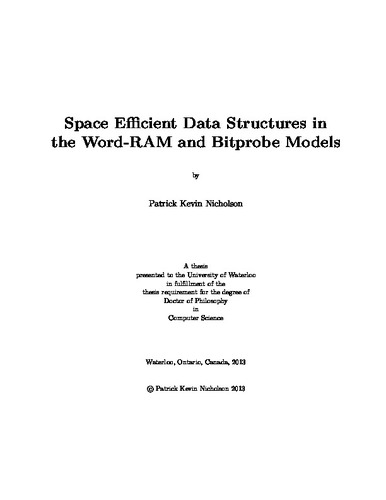 This thesis studies data structures in the word-RAM and bitprobe models, with an emphasis on space efficiency. In the word-RAM model of computation the space cost of a data structure is measured in terms of the number of w-bit words stored in memory, and the cost of answering a query is measured in terms of the number of read, write, and arithmetic operations that must be performed. In the bitprobe model, like the word-RAM model, the space cost is measured in terms of the number of bits stored in memory, but the query cost is measured solely in terms of the number of bit accesses, or probes, that are performed. First, we examine the problem of succinctly representing a partially ordered set, or poset, in the word-RAM model with word size Theta(lg n) bits. A succinct representation of a combinatorial object is one that occupies space matching the information theoretic lower bound to within lower order terms. We show how to represent a poset on n vertices using a data structure that occupies n^2/4 + o(n^2) bits, and can answer precedence (i.e., less-than) queries in constant time. Since the transitive closure of a directed acyclic graph is a poset, this implies that we can support reachability queries on an arbitrary directed graph in the same space bound. As far as we are aware, this is the first representation of an arbitrary directed graph that supports reachability queries in constant time, and stores less than n choose 2 bits. We also consider several additional query operations. Second, we examine the problem of supporting range queries on strings of n characters (or, equivalently, arrays of n elements) in the word-RAM model with word size Theta(lg n) bits. We focus on the specific problem of answering range majority queries: i.e., given a range, report the character that is the majority among those in the range, if one exists. We show that these queries can be supported in constant time using a linear space (in words) data structure. We generalize this result in several directions, considering various frequency thresholds, geometric variants of the problem, and dynamism. These results are in stark contrast to recent work on the similar range mode problem, in which the query operation asks for the mode (i.e., most frequent) character in a given range. The current best data structures for the range mode problem take soft-Oh(n^(1/2)) time per query for linear space data structures. Third, we examine the deterministic membership (or dictionary) problem in the bitprobe model. This problem asks us to store a set of n elements drawn from a universe [1,u] such that membership queries can be always answered in t bit probes. We present several new fully explicit results for this problem, in particular for the case when n = 2, answering an open problem posed by Radhakrishnan, Shah, and Shannigrahi [ESA 2010]. We also present a general strategy for the membership problem that can be used to solve many related fundamental problems, such as rank, counting, and emptiness queries. Finally, we conclude with a list of open problems and avenues for future work.