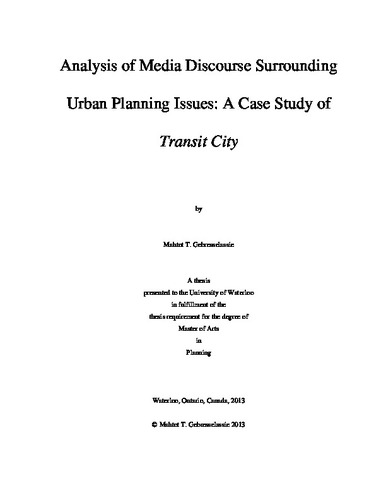 Contemporary urban planning emphasizes the need for practice to be collaborative and communicative. It stresses on the importance of public engagement and participation. To ensure informed participation, planners need to provide relevant information to the public. However, the relevance of that information depends on an understanding of the existing discourse about the issue of interest. My research examined Transit City as a case study to demonstrate how that understanding can be gained. The question that framed the research was: What are the characteristics of discourses surrounding urban planning issues? The research focused on examining media coverage to gain that understanding for two reasons. Firstly, the media are considered to be the main purveyors of public discourse. However, there are limitations in the way they represent issues as this research found. Secondly, the media play an informant role, however imperfectly, on topics that matter. In part, this role gives them their importance and influence. The research examined media discourse surrounding Transit City in 94 articles in National Post, the Toronto Star, CUTA Forum, and Ontario Planning Journal to answer the research question. Discourse analysis was used as a method to investigate the topic under the framework of interpretive policy analysis. The research found that four of the media outlets used discursive practices of representation that highlighted certain themes and excluded others. It also found that the discursive communities that were identified in the media discourse interpreted Transit City differently through their discursive frames that were informed by their interest and responsibility in regards to Transit City and their core belief systems. As such their “argumentative logic” highlighted some aspects of Transit City and excluded others in the debate that ensued. The understanding of such characteristics of discourse can help planners in two ways. First, it informs the planning and the tailoring of messages they relay to discursive communities of various relevance. It allows them to have a stronger participation in the shaping of media discourse and generation of informed debate in the public as well as the professional sphere. Second, it can help planners in developing solutions to address points of controversy and bridge differences among stakeholders effectively in their role as mediators and consensus builders. Both benefits have positive implications in creating informed participation and making the planning process a collaborative and communicative effort.