Deviant Society: The Self-Reliant "Other" in Transcendental America 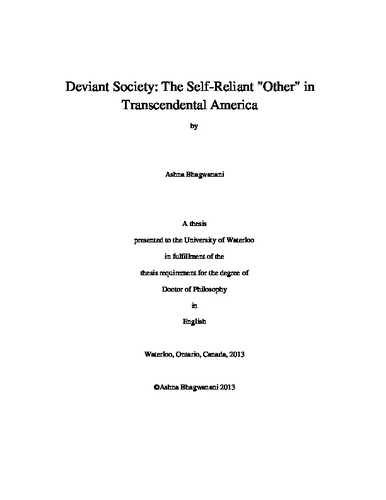 This dissertation utilizes theories of deviance in conjunction with literary methods of reading and analyzing to study a range of deviant or transgressive characters in American literature of the 1840s and 50s. I justify this methodology on the basis of the intersecting and related histories of Emersonian self-reliance and deviance in American thought. I contend that each of the texts of self-reliance discussed by the dissertation – The National Police Gazette (1845-present), Frederick Douglass’ Narrative of the Life of Frederick Douglass (1845) and My Bondage and My Freedom (1855), Margaret Fuller’s Woman in the Nineteenth Century (1845), Henry David Thoreau’s “Civil Disobedience” (1849) and Walden (1854), and Nathaniel Hawthorne’s The Scarlet Letter (1850) and The Blithedale Romance (1852) – actually sanctions deviance. Since deviance is endorsed by these texts in some shape or form, it is a critical component of American culture; consequently American culture is one that promotes deviance. My work on Douglass and Thoreau employs the sociological theories of Robert K. Merton (1949) to investigate the tensions between the culturally lauded goal of self-reliance and the legitimate means for securing this. I explore the importance of Transcendentalist self-reliance to the American Dream ethos and the ways in which it is valorized by each protagonist. The work on the National Police Gazette puts popular and elite forms of literary discourse into conversation with one another. My primary concern here is with explaining why and how specific self-reliant behaviours are deemed “deviant” in the literary context, but “criminal” by popular works. The chapters on female deviance elucidate the confines of women’s writing and writing about women as well as the acceptable female modes of conduct during the nineteenth century. They also focus on the ways female characters engaged in deviance from within these rigid frameworks. A functionalist interrogation of female deviance underscores the ways society is united against those women who are classed as unwomanly or unfeminine. My conclusion seeks to reinvigorate the conversation regarding the intersection between literature and the social sciences and suggests that literature in many ways often anticipates sociological theory. Ultimately, I conclude by broadening the category of the self-reliant individual to include, for instance, females and African-American slaves who were otherwise not imagined to possess such tendencies. Thus, this dissertation revises notions of Emerson’s concept of self-reliance by positioning it instead as a call to arms for all Americans to engage in deviant or socially transgressive behaviour.