Application of Turbo-Codes in Digital Communications 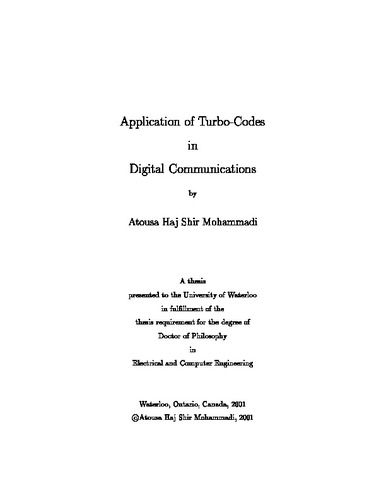 This thesis aims at providing results and insight towards the application of turbo-codes in digital communication systems, mainly in three parts. The first part considers systems of combined turbo-code and modulation. This section follows the pragmatic approach of the first proposed such system. It is shown that by optimizing the labeling method and/or modifying the puncturing pattern, improvements of more than 0. 5 dB insignal to noise ratio (SNR) are achieved at no extra cost of energy, complexity, or delay. Conventional turbo-codes with binary signaling divide the bit energy equally among the transmitted turbo-encoder output bits. The second part of this thesis proposes a turbo-code scheme with unequal power allocation to the encoder output bits. It is shown, both theoretically and by simulation, that by optimizing the power allocated to the systematic and parity check bits, improvements of around 0. 5 dB can be achieved over the conventional turbo-coding scheme. The third part of this thesis tackles the question of ``the sensitivity of the turbo-code performance towards the choice of the interleaver'', which was brought up since the early studies of these codes. This is the first theoretical approach taken towards this subject. The variance of the bound is evaluated. It is proven that the ratio of the standard deviation over the mean of the bound is asymptotically constant (for large interleaverlength, N), decreases with N, and increases with SNR. The distribution of the bound is also computationally developed. It is shown that as SNR increases, a very low percentage of the interleavers deviate quite significantly from the average bound but the majority of the random interleavers result in performances very close to the average. The contributions of input words of different weights in the variance of performance bound are also evaluated. Results show that these contributions vary significantly with SNR and N. These observations are important when developing interleaver design algorithms.