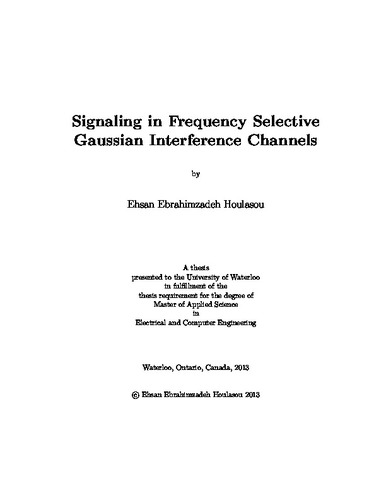 Sharing communication resources in wireless communication networks, due to the ever increasing growth in the number of users and the growing demand for higher data rates, appears to be inevitable. Consequently, present wireless communication networks should provide service for a large number of users through a frequency selective and interference limited medium rather than a single band, noise limited channel. In this thesis, we study a Gaussian interference network with orthogonal frequency sub-bands with slow faded and frequency-selective channel coefficients. The network is decentralized in the sense that there is no central node to assign the frequency sub-bands to the users. Moreover, due to lack of a feedback link between the two ends of any transmitter-receiver pair, all transmitters are unaware of the channel coefficients. Since the channel is assumed to be static during the communication period of interest, the concept of outage probability is employed in order to assess the performance of the network. In a scenario where all transmitters distribute their available power uniformly across the sub-bands, we investigate the problem of how establishing a nonzero correlation ρ among the Gaussian signals transmitted by each user along different frequency sub-bands can improve the outage probability at each of the receivers. Specifically, we show in a general k-user interference channel over N orthogonal frequency sub-bands that , when receivers treat interference as noise, ρ=0 is a point of local extremum for the achievable rate at each receiver, for any realization of channel coefficients. Moreover, in the case of K=2 with arbitrary number of sub-bands, it is verified that there exists a finite level of Signal-to-Noise Ratio (SNR) such that the achievable rate has a local minimum at ρ=0, which is not necessarily the case when K>2. We then concentrate on a 2-user interference channel over 2 orthogonal frequency sub-bands and characterize the behavior of the outage probability in the high SNR regime. We consider two simple decoding strategies at the receiver. In the first scenario, receivers simply treat interference as noise. In the second scenario, the receivers have the choice either to decode the desired signal treating interference as noise or to decode interference treating the desired signal as noise before decoding the interference free signal. Indeed, in both cases, we first show that the achievable rate is an increasing function of ρ in the high SNR regime, which suggests to repeat the same signal over the sub-bands. This observation, in a sense, reflects to the behavior of the outage probability, the scaling behavior of which in the high SNR regime is characterized for the Rayleigh fading scenario.