An Examination of Sea Ice Spring and Summer Retreat in the Canadian Arctic Archipelago: 1989 to 2010 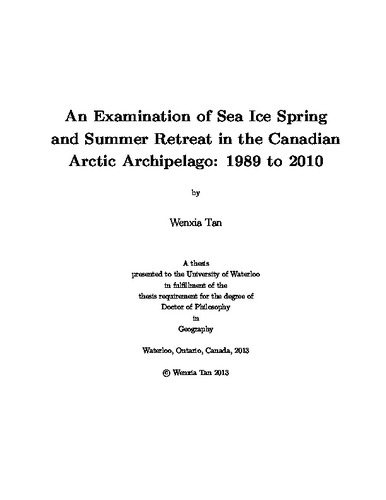 The sea ice extent change and variability of the Canadian Arctic Archipelago (CAA) are quite different compared to the Arctic as a whole due to its unique geographic settings. In this thesis, the sea ice retreat processes, the connection with other Arctic regions, and the linkages to the surface radiation flux in the CAA are examined. The sea ice retreat processes in the CAA follow a four-phase process: a slow ice melt phase that usually lasts until early June (phase 1); a quick melt phase with large daily sea ice extent change which lasts close to half-a-month (phase 2); a slow melt phase that looks like slow sea ice melt or even a small ice increase that lasts another half-a-month (phase 3); and a steady ice decrease phase (phase 4). With the help of Moderate-Resolution Imaging Spectroradiometer (MODIS) data, it is identified that the quick melt in phase 2 is actually melt ponding, with melt ponds being falsely identified as open water by passive microwave. A simplified data assimilation method is then developed to improve the passive microwave sea ice concentration estimation by fusion with MODIS ice surface temperature data. The ice concentration from the analysis is found to improve the original passive microwave sea ice concentration estimation, with the largest improvements during sea ice melt. The sea ice retreat patterns in the CAA region are correlated with the sea ice retreat patterns in other regions of the Arctic. A decision tree classifier is designed to segment the sea ice retreat patterns in the CAA into several classes and classification maps are generated. These maps are effective in identifying the geographic locations that have large changes in the sea ice retreat patterns through the years. The daily progressions of the surface radiation components are described in detail. Due to the lack of multiple reflection, the percentage of shortwave radiation at the top of atmosphere that reaches the surface is influenced by the form of melt ponds over ice surface. The roles that each surface radiation component plays in forcing sea ice retreat are different in different years.