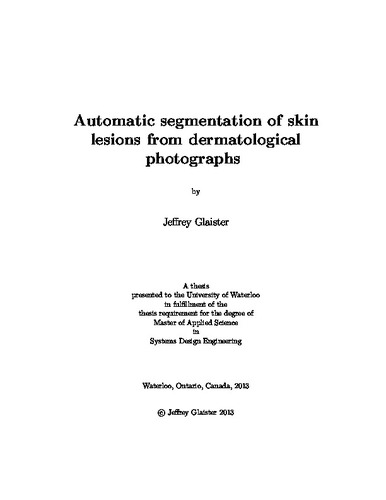 Melanoma is the deadliest form of skin cancer if left untreated. Incidence rates of melanoma have been increasing, especially among young adults, but survival rates are high if detected early. Unfortunately, the time and costs required for dermatologists to screen all patients for melanoma are prohibitively expensive. There is a need for an automated system to assess a patient's risk of melanoma using photographs of their skin lesions. Dermatologists could use the system to aid their diagnosis without the need for special or expensive equipment. One challenge in implementing such a system is locating the skin lesion in the digital image. Most existing skin lesion segmentation algorithms are designed for images taken using a special instrument called the dermatoscope. The presence of illumination variation in digital images such as shadows complicates the task of finding the lesion. The goal of this research is to develop a framework to automatically correct and segment the skin lesion from an input photograph. The first part of the research is to model illumination variation using a proposed multi-stage illumination modeling algorithm and then using that model to correct the original photograph. Second, a set of representative texture distributions are learned from the corrected photograph and a texture distinctiveness metric is calculated for each distribution. Finally, a texture-based segmentation algorithm classifies regions in the photograph as normal skin or lesion based on the occurrence of representative texture distributions. The resulting segmentation can be used as an input to separate feature extraction and melanoma classification algorithms. The proposed segmentation framework is tested by comparing lesion segmentation results and melanoma classification results to results using other state-of-the-art algorithms. The proposed framework has better segmentation accuracy compared to all other tested algorithms. The segmentation results produced by the tested algorithms are used to train an existing classification algorithm to identify lesions as melanoma or non-melanoma. Using the proposed framework produces the highest classification accuracy and is tied for the highest sensitivity and specificity.