Thriving on the New Décarie Expressway: Reconciling Trenched Urban Expressways with the City 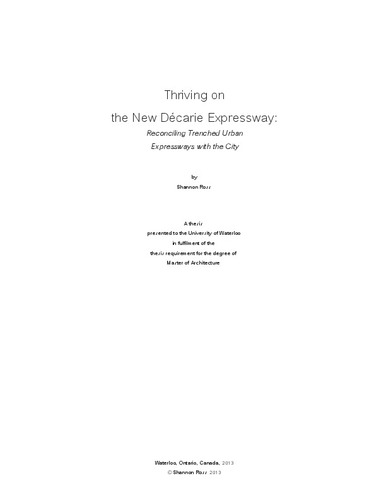 During the 1960s large trenched expressways were introduced into our urban centres to accommodate the booming vehicular traffic. These expressways were built on an enormous scale, often traversing entire cities. Unfortunately, some neighbourhoods have been divided and now share a noxious physical boundary. The Vine Street Expressway in Philadelphia, the Cross Bronx Expressway in New York and the Décarie Expressway in Montreal are examples of such thoroughfares. They are noisy, polluted and uninspiring spaces. The auto-centric mindset with which these expressways were designed with is being challenged. A desire to make cities more sustainable, healthy and accessible for their citizens is emerging. Given the decreased mobility issues that would arise if these structures were to be completely eliminated, it is necessary to explore architectural solutions to remedy the destructive effects these massive artefacts have on the urban fabric. Through surgical interventions along the Décarie Expressway in Montreal, I will investigate realistic if slightly optimistic solutions in which we can foster a symbiotic relationship between these massive trenched urban vehicular infrastructures and the surrounding urban space. The large scale of interventions allows for the exploration of the inherent possibilities for expressive structural bridging solutions over the expressway, new configurations of urban public space by utilizing the captured space over the infrastructural thoroughfare and a productive urban fabric which begins to address the potential of a hybrid urbanism of the twenty first century.