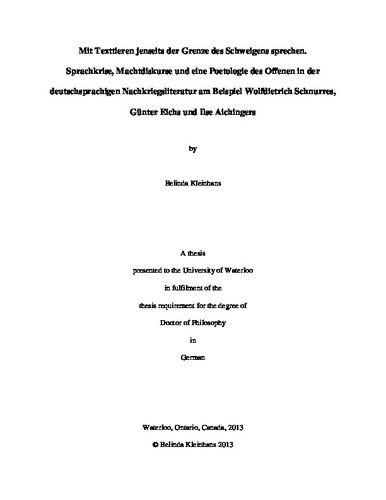 In this dissertation I analyze how the postwar German writers Wolfdietrich Schnurre, Günter Eich, and Ilse Aichinger negotiate anthropocentric and speciesist discourses via animal figures by drawing on such posthumanist thinkers as Derrida, Agamben, and Deleuze & Guattari. The literary texts question a world view and discourse organized around the establishment of power that utilizes animal metaphors to turn living beings into objects (and could thus be called “carno-phallogocentric”). They thus react to the strict hierarchy of (gendered) man over animal and respond - in the aftermath of the Second World War – by highlighting instead the similarities between man and animal, such as creaturely existence and shared trauma. The analysis is guided by questions such as: How do the literary texts reflect and subvert the power discourses which surround man and animal? What is the role of language in this context? How does the animal, which is usually assumed to be mute, relate to the categories that are established in language? Does its place outside of language grant it capabilities the human cannot realize? Can the literary encounter between man and animal establish a space of the “Open” in which language can be re-evaluated and, after World War II, be saved? Is there a unique “animal poetology” which correlates to post-anthropocentric conceptions of the human? Because these writers disorient the reader’s perception of reality via figures of the animal, i.e., animals as both metaphors and as subjects, I develop what I would like to call an “animal poetology” that is unique to them. This animal poetology, which redefines Agamben’s concept of the open by giving it a postwar, language-critical dimension, includes a thorough critique of human language with regard to power structures and a speciesist language which, during the early 20th century, was a vehicle for ideology and discrimination. The encounter with the animal leads the human being to reflect on the limits of language and thus enables the establishment of a mode of being in which the encounter with the other – beyond a space of judgement and hierarchies –is once again possible.