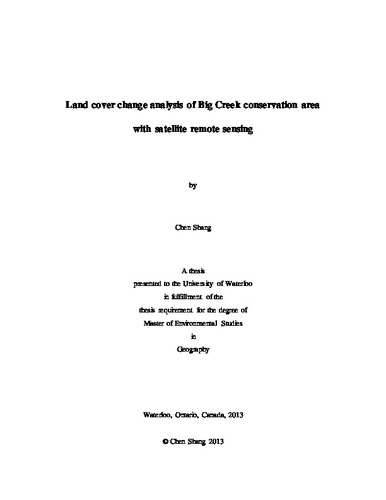 Due to the relatively complex land cover configuration and a series of significant ecological implications, the issue of land cover changes in the Big Creek area are of critical value to environmental conservation groups, policy makers, and relevant stakeholders. In consultation with the Carolinian Canada Coalition (CCC), the potential of IKONOS imagery as a high spatial resolution remote sensing product is assessed for significant habitat mapping, and a change detection methodology is developed and implemented for the Big Creek area that will be of value to decision makers and policy analysts. In order to take advantage of the synergistic strengths of multiple change detection techniques, a hybrid approach is adopted in this study, aiming to detect and stratify land cover changes over the time span from 2004 to 2012. On the basis of an assessment of the capability of differentiating changed from unchanged areas, the image differencing method based on Normalized Difference Vegetation Index (NDVI) was found to be the most accurate among the three change detection techniques employed in this study. As an attempt to incorporate local spatial autocorrelation information into the change detection analysis, the Getis statistic was used as a spatial filter in conjunction with the image differencing technique, and it showed great promise for improving the change/no change maps both qualitatively and quantitatively. In particular, the extreme Getis statistic proposed in this study demonstrated strong potential for automatically determining the optimal scale for spatial smoothing, which could greatly improve the efficiency and accuracy of change detection practices. In addition, the performance of the post-classification comparison approach was found to be highly dependent on the intrinsic characteristics of the individual classified maps, rather than simply the accuracy scores of the classifications subject to the comparison. Therefore, it is recommended that a benchmark approach be taken to compensate for this uncertainty of the post-classification comparison method, such that the negative impact of the misclassification errors in the individual classified maps could be reduced to an acceptable level. The findings of this research will contribute to a better understanding of the usefulness of some widely used change detection techniques in a relatively complex physical environment with abundant vegetation cover. In addition, the application of the Getis statistic as a spatial filter is proven useful for suppressing potential "salt and pepper" effects in the context of change detection analysis, especially if high spatial resolution imagery is employed. With minor modifications, the workflow proposed in this study is likely to reliably fulfill the purpose of monitoring land cover dynamics in other environments as well. However, it should be noted that clear awareness of the characteristics of the study area and needs of information is a premise to the successful application of any change detection approach in different environments.