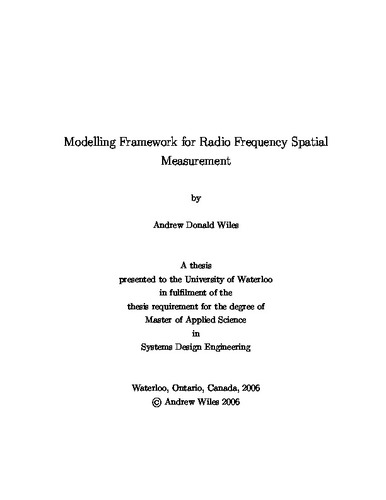 The main crux of this thesis was to produce a model that was capable of simulating the theoretical performance of different configurations for a spatial measurement system using radio frequency technology. It has been important to study new modalities of spatial measurement since spatial measurement systems are an enabling technology that have allowed for the creation of better medical procedures and techniques, provided valuable data for motion capture in animation and biomechanics, and have improved the quality of manufacturing processes in many industries. However, there has been room for improvement in the functional design and accuracy of spatial measurement systems that will enhance current applications and further develop new applications in medicine, research and industry. <br /><br /> In this thesis, a modelling framework for the investigation of spatial measurement based on radio frequency signals was developed. The simulation framework was designed for the purpose of investigating different position determination algorithms and sensor geomatries. A finite element model using the FEMLAB partial differential equation modelling tool was created for a time-domain model of electromagnetic wave propagation in order to simulate the radio frequency signals travelling from a transmitting source antenna to a set of receiving antenna sensors. Electronic line signals were obtained using a simple receiving infinitesimal dipole model and input into a time difference of arrival localization algorithm. The finite element model results were validated against a set of analytical solutions for the free space case. The accuracy of the localization algorithm was measured against a set of possible applications for a potential radio frequency spatial measurement system design. <br /><br /> It was concluded that the simulation framework was successful should one significant deficiency be corrected in future research endeavours. A phase error was observed in the signals extracted at the receiving antenna locations. This phase error, which can be up to 40°, was attributed to the zeroth order finite elements implemented in the finite element model. This phase error can be corrected in the future if higher order vector elements are introduced into future versions of FEMLAB or via the development of custom finite element analysis software but were not implemented in this thesis due to time constraints. Other improvements were also suggested for future work.