How We Became Legion: Burke's Identification and Anonymous 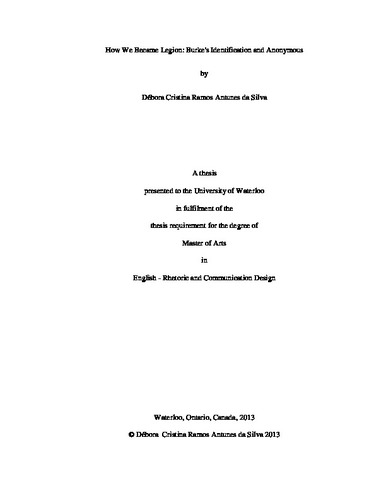 This thesis presents a study of how identification, according to Kenneth Burke's theory, can be observed in the media-related practices promoted by the cyber-activist collective Anonymous. Identification is the capacity of community-building through the use of shared interests. Burke affirms that, as human beings are essentially social, identification is the very aim of any human interaction. Cyber-activism deeply relies on this capacity to promote and legitimise its campaigns. In the case of Anonymous, the collective became extremely popular and is now a frequent presence even in street protests, usually organised online, around the world. Here, I argue that this power was possible through the use of identification, which helped attract a large number of individuals to the collective. Anonymous was particularly skilled in its capacity to create an ideology for each campaign, which worked well to set up a perfect enemy who should be fought against by any people, despite their demographic or social status. Other forms of identification were also present and important. Although it is impossible to measure how many people or what kind of people Anonymous has been attracting, the presence of identification as a strong phenomenon is undeniable, since the collective is now one of the most famous cyber-activist organisations.