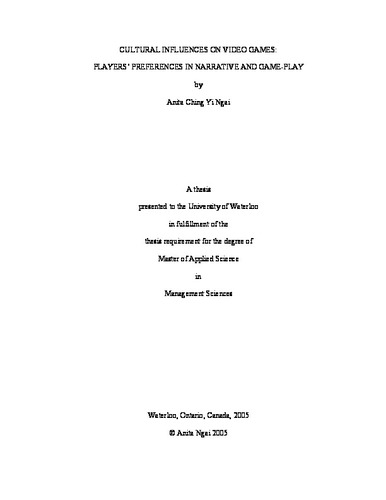 As an entertainment media, video games provide pleasure and enjoyment through interactions with various game elements. Some games are more successful in one part of the world than others, which sales data have clearly shown over the years. Games designed in various parts of the world often have distinct differences, as developers implicitly or subconsciously convey their values and culture in their creations. Thus, in examining ?what is fun,? one must move beyond technical aspects of game design and look into immersion and emotional experiences. <br /><br /> In this paper, sales data for 2004 were first examined, followed by a case study to investigate any differences between Japan and the US, where major game console manufacturers and game developers reside. Although they indicated differences in popularity of genres and design approaches, results from the survey were not able to verify conclusively major statistical difference between the two groups of respondents. <br /><br /> The survey was constructed with a focus on narrative and game-play elements, in hopes to get a better understanding of players? preferences through the concept of immersion, which were anticipated to be influenced by cultural differences. Although no major differences were found, given the small sample population, it could be seen that there was a greater sense of character attachment from Japanese respondents, while American respondents did not like to be forced away from their actions by ?long? narrative elements.