The Faking Dilemma: Examining Competing Motivations in the Decision to Fake Personality Tests for Personnel Selection 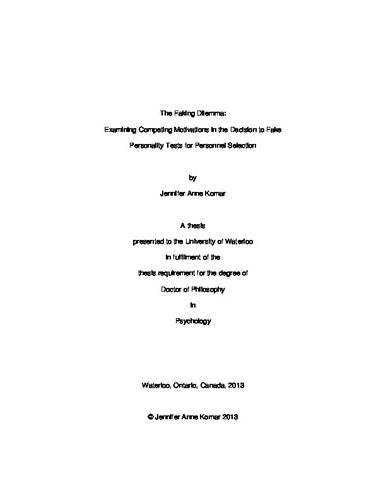 More than 80 years ago, researchers and practitioners first recognized that applicants may be motivated to fake their responses to pre-employment personality tests to improve their chances of securing employment (Zickar & Gibby, 2006). Although we have learned much about faking over the ensuing decades, we still know very little about the situational or individual factors that influence applicants’ motivation to fake. In this dissertation, I evaluated several situational and individual variables to determine the degree to which they work independently and jointly to influence responses to a personality test. Study 1 examined the impact of 12 situational variables on faking intentions. The desirability of the job, warning applicants that their responses would be verified, warning applicants that faking will result in their removal from the applicant pool, and the number of other available job opportunities were found to have strong effects on faking intentions. In Studies 2 and 3, these variables were examined in experiments with a sample of undergraduate students and a sample of job seekers to determine if, and how, these variables interact to influence faking. In both studies, significant higher-order interactions were found among the variables in predicting intentions to fake. It appeared that test takers did take into account the desirability of the job, warnings against faking and the number of other job opportunities in deciding whether faking would be a prudent test-taking strategy, although the results were not entirely consistent across the two studies. Study 3 also utilized expectancy theory to attempt to explain the effects of the situational and individual difference variables on intentions to fake. Expectancy, instrumentality and valence perceptions were significant predictors of intentions to fake, however, job desirability, the perception of negative consequences for faking and the number of job opportunities were not strongly related to expectancy, instrumentality and valence. Studies 2 and 3 also demonstrated that the trait of honesty-humility was negatively related to test takers’ intentions to fake. These three studies provide some empirical support for existing models of faking and enhance the understanding of the antecedents of the motivation to fake on pre-employment personality assessments.