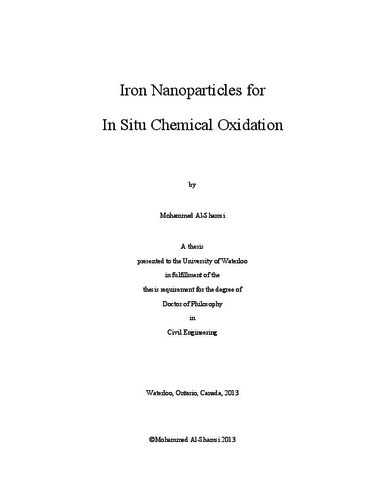 Recently, metal nanoparticles have attracted the attention of researchers in several fields of study due to their high surface area and other unique properties. Using metal nanoparticles as a component of an in situ chemical oxidation (ISCO) system is emerging and hence very little information is available. In this research, nano zero valent iron (nZVI) particles and iron-based bimetallic zero valent nanoparticles (BZVNs) were employed to activate some common peroxygens (hydrogen peroxide (H2O2), persulfate (S2O82-), and peroxymonosulfate (HSO5-)) to degrade hazardous organic compounds. Aqueous and soil slurry batch systems were used along with a one-dimensional physical model. The results from the aqueous batch systems showed that nZVI is a promising activator for S2O82- compared to other conventional iron activators (e.g., granular-ZVI and Fe2+). For example, the initial trichloroethylene (TCE) reaction rate by nZVI activated S2O82- was 1.11 x 10-4 M L-1 min-1 compared to an initial reaction rate of 6.25 x 10-5 M L-1 min-1, 5.18 x 10-6 M L-1 min-1, and 1.8 x 10-7 M L-1 min-1 for Fe2+ activated S2O82-, granular-ZVI activated S2O82-, and non-activated S2O82-, respectively. However, the surfaces of nZVI particles were passivated quickly following exposure to S2O82-, causing the reaction rate to reduce to a magnitude representative of an un-activated S2O82- system. An iron-sulfate (FeSO4) complex was formed on the surfaces of the nZVI particles following exposure to S2O82- compared to the iron oxyhydroxide (FeOOH) layer that was present on fresh nZVI surfaces. BZVNs showed better treatment effectiveness than nZVI particles as activators for H2O2, S2O82-, and HSO5-. For example, the TCE reaction rate constant for nano-Ag-Fe0 activated H2O2 was 9 to 18 fold higher than that for nZVI activated H2O2. Of the nine different BZVNs investigated as activators, the greatest TCE degradation was achieved by nano-Pd-Fe0 and nano-Zn-Fe0 activated S2O82- system, nano-Co-Fe0 activated HSO5- system, and nano-Ag-Fe0 activated H2O2 system. For all of these systems, an increase in the dosage of nanoparticles and peroxygens increased TCE degradation. The activated H2O2 system showed a lower TCE degradation rate compared to either the activated S2O82- or the activated HSO5- systems, suggesting that a bridged group complex is formed between the activators and H2O2. The dissolved TCE concentration remaining in the soil slurry batch systems after using the nano-Pd-Fe0 activated S2O82- system was two to three fold higher than that in an aqueous batch system. Furthermore, for five different aquifer materials used, the higher mass of aquifer materials the lower the TCE degradation, indicating that the aquifer materials compete with a target organic compound in the presence of activated S2O82-. A linear relationship was observed between the organic carbon (OC) content and the initial TCE decomposition rate. Although there is no direct evidence of the effect of OC on the treatment system, it is suggested that the OC may result in scavenging the generated free radicals or by directly consuming persulfate. In the one-dimensional physical model systems, bimetallic nanoparticles were mobile in a non-geological porous medium and relatively immobile in a geological porous medium. In the non-geological porous medium, we found that adding a second metal (e.g., Pd) to nano-Fe0 particles significantly improved their functionality and performance (e.g., mobility and suspension). For example, the results from mobility experiments using columns packed with glass beads showed that the effluent iron concentration was <6 % of the influent iron concentration for the nano-Fe0 particles, while it was ~100 % for the nano-Pd-Fe0 particles. In the geological porous medium, based on visual inspection, nano-Pd-Fe0 particles could not travel more than a few centimeters into columns packed with CFB Borden sand, and no iron was detected in the effluent. To overcome the delivery issue in porous media, nano-Pd-Fe0 particles were injected to create a zone of activation to activate S2O82- for the treatment of TCE source zone. However, we found that the TCE mass destruction was only 9 % higher in the nano-Pd-Fe0 activated S2O82- system compared to the non-activated S2O82- system as revealed by the effluent chloride concentration. In addition, the activation zone composed of nano-Pd-Fe0 particles was rapidly deactivated after exposure to persulfate as visually observed by color change, indicating that the longevity of the activation zone is limited. This research effort provides a contribution to the field of ISCO by evaluating the potential utility and applicability of a new class of activators for some common peroxygens.