Heroism, Gaming, and the Rhetoric of Immortality 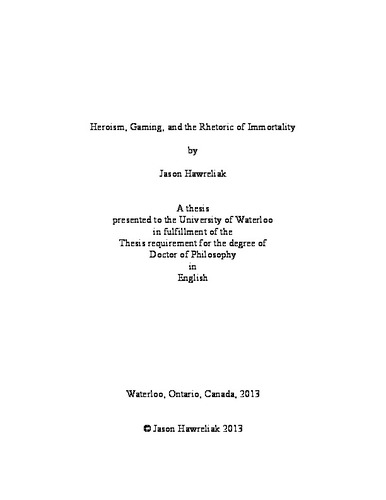 This dissertation examines rhetorics of heroism and immortality as they are negotiated through a variety of (new) media contexts. The dissertation demonstrates that media technologies in general, and videogames in particular, serve an existential or “death denying” function, which insulates individuals from the terror of mortality. The dissertation also discusses the hero as a rhetorical trope, and suggests that its relationship with immortality makes it a particularly powerful persuasive device. Chapter one provides a historical overview of the hero figure and its relationship with immortality, particularly within the context of ancient Greece. Chapter two examines the material means by which media technologies serve a death denying function, via “symbolic immortality” (inscription), and the McLuhanian concept of extension. Chapter three examines the prevalence of the hero and villain figures in propaganda, with particular attention paid to the use of visual propaganda in the twentieth and twenty-first centuries. Chapter four situates the videogame as an inherently heroic, death denying medium; videogames can extend the player’s sense of self, provide quantifiable victory criteria, and allow players to participate in “heroic” events. Chapter five examines the soldier-as-hero motif as it appears in two popular genres, the First Person Shooter, and Role-Playing Game. Particular attention is paid to the Call of Duty series and The Elder Scrolls V: Skyrim. Chapter six outlines an “epistemological exercise,” which attempts to empirically test the claims made in the previous chapters via Terror Management Theory, an experimental paradigm which examines the relationship between mortality, self-esteem, and ideology. The conclusion discusses how videogames can contest prevailing views of the heroic, and calls for a departure from contemporary game design practices.