Interactions between DNA and starch nanoparticles: adsorption and covalent attachment 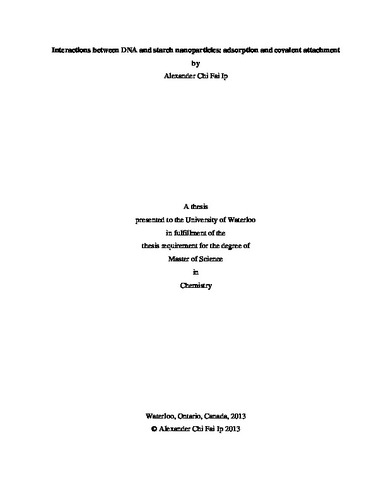 Biopolymers have been recently received more and more attention as a renewable substitute for traditional petroleum-based materials. Products made from petroleum-based materials typically cannot be recovered, with long term ramifications in sustainability and environmental concerns. Biopolymers such as starch are renewable, environmentally-friendly alternatives which have found additional use beyond their traditional roles as food substances as a biopolymer material, replacing their petroleum-based counterparts with comparable physical properties but also featuring long-term sustainable use. One such use is for starch to replace latex as a paper binder. Starch nanoparticles have seen tremendous development in use as a paper binder in place of traditional petroleum-based latexes, and other possibilities for the use of these starch nanoparticles are also being explored. Nucleic acids have long been used by Nature as a carrier of genetic information. Recent advances in technology have allowed the fine manipulation of nucleic acids to take advantage of their inherent stability for roles beyond genetics. This includes the use of nucleic acids for bio-based sensing and for immunochemistry, which takes advantage of the chemical structure of nucleic acids for practical use. In this thesis, the interactions between starch and deoxyribonucleic acid (DNA) biopolymers are investigated. The two biopolymers are found to adsorb to each other when dispersed in aqueous solution together. This can lead to the co-precipitation of the two biopolymers together out of solution in organic solvents such as ethanol. The generalizability of this interaction is explored, including its dependence on starch crosslinking, on the length and sequence of DNA, and the pH and salt concentration of the solvent. Fluorescence spectroscopy was used to characterize their interaction, supported by other similar techniques. The covalent linkage of DNA and starch is also investigated. To this end, the appropriateness of using a starch-based nanoparticle with DNA coupling for drug delivery is considered. Starch is oxidized and covalently linked with DNA used as a targeting ligand and introduced to the HeLa cancer cell line. Various fluorescence-based techniques were used to monitor this interaction.