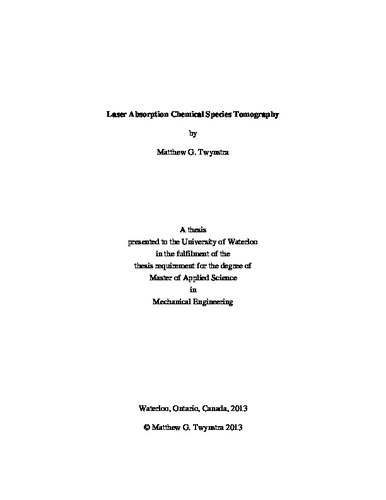 This thesis outlines two advancements in the field of limited data absorption tomography. First, a novel reconstruction algorithm integrating the use of level set methods is presented that incorporates the additional a priori knowledge of a distinct interface between the species of interest and co-flow. The added a priori further reduces the ill-posedness of the system to produce a final concentration distribution that explains the laser absorption measurements and is qualitatively consistent with advection/diffusion transport. The algorithm is demonstrated by solving a simulated laser tomography experiment on a turbulent methane plume, and is compared with the current state-of-the-art reconstruction algorithm. Given the limited number of attenuated measurements, accurate reconstructions are also highly dependent on the locations sampled by the measurement array. This thesis displays how the mathematical properties of the coefficient matrix, A, formed by the locations of the lasers, are related to the information content of the attenuation data using a Tikhonov reconstruction framework. This formulation, in turn, becomes a basis for a beam arrangement design algorithm that minimizes the reliance on additional assumed information about the concentration distribution. Using genetic algorithms, beam arrangements can be optimized for a given application by incorporating physical constraints of the beam locations. The algorithm is demonstrated by optimizing unconstrained and constrained arrangements of light sources and detectors. Simulated experiments are performed to validate the optimality of the arrangements.