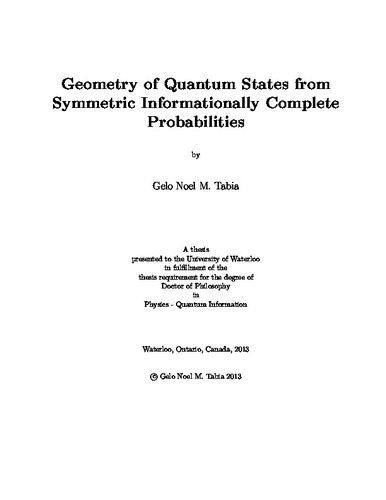 It is usually taken for granted that the natural mathematical framework for quantum mechanics is the theory of Hilbert spaces, where pure states of a quantum system correspond to complex vectors of unit length. These vectors can be combined to create more general states expressed in terms of positive semidefinite matrices of unit trace called density operators. A density operator tells us everything we know about a quantum system. In particular, it specifies a unique probability for any measurement outcome. Thus, to fully appreciate quantum mechanics as a statistical model for physical phenomena, it is necessary to understand the basic properties of its set of states. Studying the convex geometry of quantum states provides important clues as to why the theory is expressed most naturally in terms of complex amplitudes. At the very least, it gives us a new perspective into thinking about structure of quantum mechanics. This thesis is concerned with the structure of quantum state space obtained from the geometry of the convex set of probability distributions for a special class of measurements called symmetric informationally complete (SIC) measurements. In this context, quantum mechanics is seen as a particular restriction of a regular simplex, where the state space is postulated to carry a symmetric set of states called SICs, which are associated with equiangular lines in a complex vector space. The analysis applies specifically to 3-dimensional quantum systems or qutrits, which is the simplest nontrivial case to consider according to Gleason's theorem. It includes a full characterization of qutrit SICs and includes specific proposals for implementing them using linear optics. The infinitely many qutrit SICs are classified into inequivalent families according to the Clifford group, where equivalence is defined by geometrically invariant numbers called triple products. The multiplication of SIC projectors is also used to define structure coefficients, which are convenient for elucidating some additional structure possessed by SICs, such as the Lie algebra associated with the operator basis defined by SICs, and a linear dependency structure inherited from the Weyl-Heisenberg symmetry. After describing the general one-to-one correspondence between density operators and SIC probabilities, many interesting features of the set of qutrits are described, including an elegant formula for its pure states, which reveals a permutation symmetry related to the structure of a finite affine plane, the exact rotational equivalence of different SIC probability spaces, the shape of qutrit state space defined by the radial distance of the boundary from the maximally mixed state, and a comparison of the 2-dimensional cross-sections of SIC probabilities to known results. Towards the end, the representation of quantum states in terms of SICs is used to develop a method for reconstructing quantum theory from the postulate of maximal consistency, and a procedure for building up qutrit state space from a finite set of points corresponding to a Hesse configuration in Hilbert space is sketched briefly.