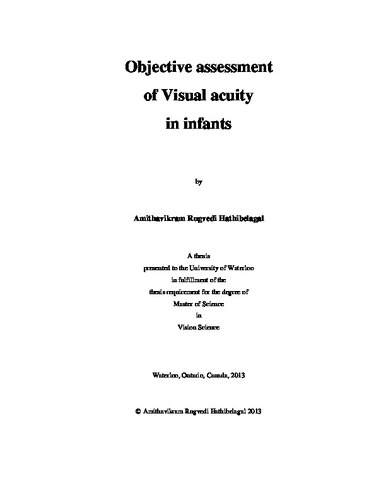 Purpose Early detection of abnormal visual acuity (VA) is crucial in the identification and management of ocular and visual abnormalities in infants. Currently, the Teller Acuity Cards (TACs) are considered the gold standard for clinical testing and are effective in obtaining a quick estimate of an infant’s VA, but they have certain drawbacks. They rely on a subjective assessment of the baby’s looking behavior. Despite this, TACs have been found to have good validity and repeatability. The current study investigates a new method to objectively assess visual acuity in infants, which is uses a video gaze tracker (GT) and computer-generated stimuli, developed in the lab of M. Eizenman at the University of Toronto. The purpose was to validate this method in adults and infants against current clinical VA tests. Visual scanning patterns were measured by the GT system that requires minimal subject cooperation in adult and infant populations. The targets were judged as seen when the relative fixation time on the grating exceeded a pre-determined threshold, as compared to the fixation time on the luminance-matched background. Methods Experiment 1: In 15 uncorrected myopic adults, binocular grating VA was measured. The targets were square-wave gratings of spatial frequency ranging from 2.3 to 37 cpd presented randomly in one of four positions on the screen. There were 6 objective protocols (in which VA was judged by fixations). The subjects were naïve, as the only instruction given to the participants was to look towards the screen. The experimenter, who presented the gratings also acted as an observer by making judgments of seen/not seen responses using the objective information provided by the software. Objective GT VA was compared with VA measured with subjective responses using the same stimuli and with Teller Acuity Cards (TACs). Experiment 2: Binocular grating VA for horizontal gratings was measured in 20 typically-developing infants aged 3 to 12 months. Spatial frequency ranged from 0.32 to 42 cpd and VA was measured on two visits with both the GT and TACs. A staircase protocol was used to obtain the VA threshold in the GT. The experimenter controlled the staircase method and an observer used the objective information of visual fixations using the software to judge if the grating was seen or not. Video cartoons were shown between stimulus presentations to keep the infant’s attention towards the screen. VA was also measured with the TACs held in the vertical orientation, so that the gratings were horizontal, similar to the GT method. A TAC stage was specially designed with a vertical slot in which the cards could be presented. The observer was masked regarding the participant’s age and the starting spatial frequency. The study co-ordinator determined the choice of the start card which was randomized between participants so as to give an equal number of participants with each start card. The same start card was used for the second session of each infant. The threshold was defined as the highest spatial frequency for which the infant gave a clear, correct look and an unclear/inconsistent look for the next higher level. The observer, who was masked regarding the absolute spatial frequency, increased or decreased the spatial frequency until this threshold was determined. Results Experiment 1: The mean age of participants in the adult study was 28.47±7.93 yrs and their mean uncorrected logMAR acuity was 0.9±0.2. There was no obvious difference among the mean acuities obtained by 6 objective GT protocols, the subjective GT protocol and the TACs. The GT showed agreement of 93% and 100 % within half an octave compared with the subjective protocol and TACs (horizontal gratings) respectively. There was 100% agreement within 1 octave of the objective GT with both the subjective protocol and the TACs (horizontal gratings). The objective gaze tracker VA showed significant correlation with uncorrected refractive error (r =0.87, p < 0.001). Experiment 2: The mean age of participants was 7.9±2.5 months. In both visits, the testability of the TACs was 100% across all infants. GT had 100% testability on the first visit and 95% testability on the second visit. The mean TAC acuity over two visits for all the infants was 0.7±0.23 log cycles per degree, while the mean log GT acuity over two visits was 0.86±0.30. Infant GT VA acuity estimates were within 1 octave of the TACs 90% and 79% of the time for the first and second visit respectively, while GT VA estimates were within half octave of the TACs 63.2% and 47% of the time for the first and second visit respectively. Eighty-seven percent of the GT VAs and 72.5% of TACs were within one octave of the mean age norms, although on average the GT gave better acuities than the TACs. There was an increase in GT VA with increasing age (r=0.80, p<0.005 for the first visit and r=0.77, p<0.005 for the second visit). Both the TACs and the GT had repeatability of 89.5% within 1 octave between visits and 84.2% and 79% within half octave between visits respectively. Conclusions In adults, the gaze tracker gave VA thresholds which were equivalent to the TACs and were not significantly different from subjectively determined grating VA. The agreement of the GT with TACs in infants and with norms in the infant literature established good validity for the GT. Finally, the significant correlation with age confirmed the validity of the measurements of the gaze tracker. The repeatability of the gaze tracker was similar to that of the TACs, demonstrating the quality usefulness of the test. These results demonstrate the potential for an automated test of infant visual acuity, which could be a powerful and useful tool for visual acuity assessment in infants and other population groups who cannot respond verbally. The staircase protocol established in the study could be fully automated in an objective version of the test. The raw data of eye movements obtained in this study such as the pattern of first fixations, time taken for first fixations, time spent fixing the stimulus, typical stimulus duration and time between presentations could be used to develop algorithms for fully automated testing of VA in infants.