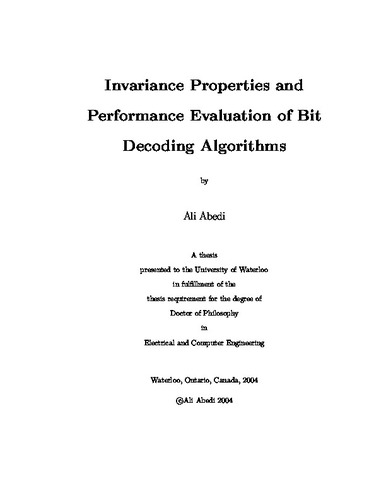 Certain properties of optimal bitwise APP (A Posteriori Probability) decoding of binary linear block codes are studied. The focus is on the Probability Density Function (<i>pdf</i>) of the bit Log-Likelihood-Ratio (<i>LLR</i>). A general channel model with discrete (not necessarily binary) input and discrete or continuous output is considered. It is proved that under a set of mild conditions on the channel, the <i>pdf</i> of the bit <i>LLR</i> of a specific bit position is independent of the transmitted code-word. It is also shown that the <i>pdf</i> of a given bit <i>LLR</i>, when the corresponding bit takes the values of zero and one, are symmetric with respect to each other (reflection of one another with respect to the vertical axis). In the case of channels with binary inputs, a sufficient condition for two bit positions to have the same <i>pdf</i> is presented. An analytical method for approximate performance evaluation of binary linear block codes using an Additive White Gaussian Noise (AWGN) channel model with Binary Phase Shift Keying (BPSK) modulation is proposed. The pdf of the bit LLR is expressed in terms of the Gram-Charlier series expansion. This expansion requires knowledge of the statistical moments of the bit <i>LLR</i>. An analytical method for calculating these moments which is based on some recursive calculations involving certain weight enumerating functions of the code is introduced. It is proved that the approximation can be as accurate as desired, using enough numbers of terms in the Gram-Charlier series expansion. A new method for the performance evaluation of Turbo-Like Codes is presented. The method is based on estimating the <i>pdf</i> of the bit <i>LLR</i> by using an exponential model. The moment matching method is combined with the maximum entropy principle to estimate the parameters of the new model. A simple method is developed for computing the Probabilities of the Point Estimates (PPE) for the estimated parameters, as well as for the Bit Error Rate (BER). It is demonstrated that this method requires significantly fewer samples than the conventional Monte-Carlo (MC) simulation.