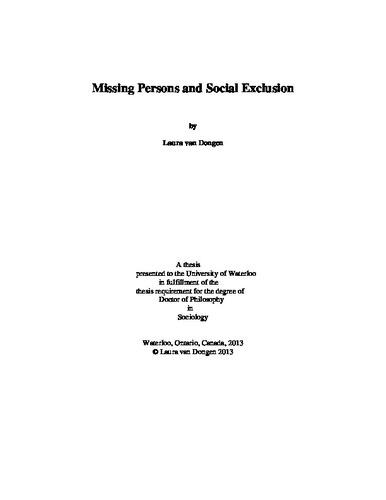 People who go missing are often perceived to have done so voluntarily, and yet, many missing persons in Canada are Aboriginal, visible minorities, homeless, and are fleeing from violence, abuse, and neglect. Integrating the concept of social exclusion and an intersectional perspective with a sample of 724 missing persons cases drawn from one Canadian police service, this dissertation examines the systemic issues underlying peoples’ disappearances. This dissertation also explores the role of social and economic disadvantage in the risk of a long term disappearance. A combination of univariate (descriptions), bivariate (cross-tabulations), and multivariate (logistic regression) analyses identify correlates and causes of going missing and correlates and causes of long term disappearances. The concept of social exclusion explains how structural processes prevent particular groups and individuals from gaining access to valued social relationships and economic opportunities in a particular society, resulting in considerable hardship and disadvantage. This dissertation argues that people who are marginalized and excluded have few resources to rely on to cope with stress and strain and may resort to going missing if confronted with adversity. Groups who are overrepresented among missing persons compared to the general population are identified by cross-tabulations and chi-square tests. Multivariate analysis (partial tables and logistic regression) is used to control for possible sources of spuriousness, in order to have more confidence in imputing causal relationships between membership in disadvantaged groups and going missing. Moreover, if disadvantaged groups go missing, they further sever ties with families, the labour market, and other mainstream institutions. As a result of extreme disadvantage, they may find it difficult to (re)connect with conventional social relationships and mainstream society. For example, youth who are escaping violence and abuse at home often end up on the streets and sever ties with schools, families, and other conventional support networks and become engaged in street culture. As a result of extreme disadvantage these young people are at risk of a long term disappearance. In other words, social exclusion is expected to be a risk and causal factor in long term disappearances. Groups who are overrepresented among long term disappearances compared to short term disappearances are identified by cross-tabulations and chi-square tests. Logistic regression analysis is used to draw conclusions about causal factors in long term disappearances. This research finds that excluded groups such as disadvantaged youth, Aboriginal people, women and other visible minorities, victims of violence, and youth in care are at disproportionate risk of going missing. Consistent with an intersectional perspective, this dissertation shows that certain groups who are multiply marginalized such as Aboriginal women and young women face an especially high risk of going missing. Aboriginal identity, labour force status, and homelessness are also implicated as causal factors in peoples’ disappearances. Moreover, this research finds that social exclusion is a risk and causal factor in long term disappearances as Aboriginal people, homeless people, minorities and other excluded groups face a high risk of a long term disappearance. Linking missing persons with the concept of social exclusion highlights the role of structural issues in peoples’ disappearances and refutes the common misperception that going missing is a choice. In terms of policy, the findings from this research indicate that prevention and intervention depend on targeting poverty, discrimination, gender inequality, violence, and other structural issues associated with social exclusion.