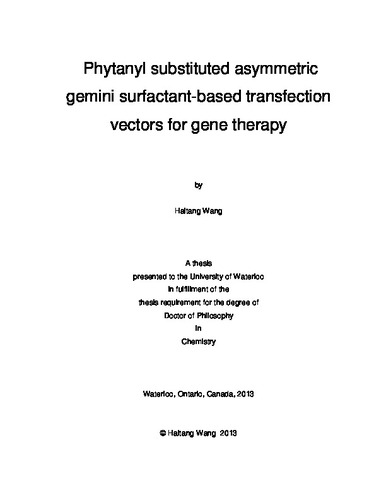 To achieve successful gene therapy, safe and efficient gene delivery vectors are needed. As an alternative to viral vectors, non-viral vectors, incorporating compounds such as cationic polymers and lipids have been widely studied. Much effort has been made to enhance transgene delivery efficiency, such as development of more effective cationic lipids or polymers, optimization of transfection formulations, and investigation on structural-activity of delivery vectors. Gemini surfactant, consisting of two surfactant monomers linked by a spacer group, is a thrust research area for gene therapy as non-viral vectors due to their high stability, longer storage on shelves, easiness to produce. A series of phytanyl substituted asymmetric gemini surfactants, phy-3-m (m = 12, 16, and 18) and phy-7NH-m (m = 12, 16, and 18), were rationally designed and synthesized. Due to the bulky nature and increased hydrophobicity of phytanyl branch, phy-3-m surfactants showed much lower values of critical micelle concentration (CMC) compared to their corresponding symmetric m-3-m. Particle size and transmission electron microscopy (TEM) imaging indicate that this type of gemini surfactants tends to form stacked bilayers rather than spherical or rod-like micelles which are typically observed in gemini surfactants with shorter spacers. Phy-3-m surfactants have higher degree of micelle ionization, indicating that the counter ions of the gemini surfactants can be easily replaced by other anionic ions, such as DNA, which is an advantage of phy-3-m used as transgene vectors. To evaluate transfection ability, transfection assays were carried out in OVCAR-3 cells. Transfection complexes formed by a plasmid pVGtelRL, coding enhanced green fluorescence protein (EGFP) gene, phy-3-m, and a neutral lipid, 1,2-Dioleyl-sn-glycerophosphatidylethanolamine (DOPE), at the charge ratios (+/-) of 2:1, 5:1, 10:1, and 20:1, were incubated with OVCAR-3 cells. Treated cells at all charge ratios except 20:1 showed EGFP signals under fluorescence microscopy. Meanwhile, EGFP expression and cell toxicity was quantified using fluorescence-activated cell sorting (FACS). For each gemini surfactant complex, the transfection efficiency and cytotoxicity go through a maximum, occurring at different values of the charge ratio. Considering both transfection efficiency and cytotoxicity, the optimal charge ratio to formulate the complexes containing phy-3-m was found to be 5:1 for in vitro transfection. Compared to a positive control, 16-3-16, phy-3-m showed higher transfection ability and lower cytotoxicity to OVCAR-3 cells. Initial characterization of transfection complexes was investigated by measuring particle size and zeta potential. At all charge ratios, transfection complexes were positively charged, and greater than +30 mV at 5:1 and 10:1, indicating that the complexes would be stable in solution at the ratio above 2:1. Transfection complexes were larger at lower charge ratio, but particle size dropped with increasing charge ratio (+/-). Comparing particle size and zeta potential with transfection efficiency, no correlation between size/zeta potential and transfection ability was observed. The larger particles may enter cells through caveolin-mediated pathway or phagocytosis, and smaller ones through a clathrin-mediated endocytosis. In addition, phase structures of the complexes were investigated using small angle X-ray scattering (SAXS). The complexes containing phy-3-m gemini surfactants were found to be able to adopt multiple phase structures, such as L, HII, and other highly ordered unidentified phase structures. By contrast, L structure was dominant in the transfection complexes formed by 16-3-16. The ability of phy-3-m system to adopt multiple phases appears correlated with their higher transfection efficiency in OVCAR-3 cells.