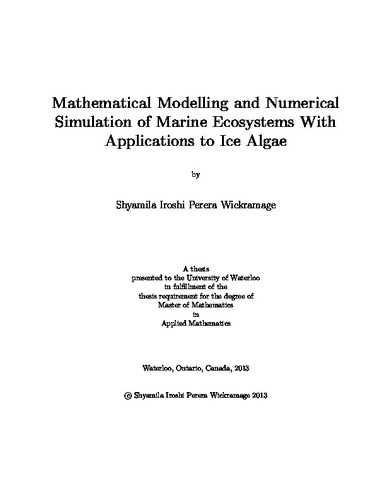 Sea-ice ecosystem modelling is a novel field of research. In this thesis, the main organism studied is sea-ice algae. A basic introduction to algae and its importance in the aquatic food web is given first. An introduction to modeling and its purposes is presented, and this is followed by a brief description of ice algae models in practice with some physical conditions which influence ecosystem modelling. In the following Chapter, a simple mathematical model to represent the algae population is derived, and analyzed using pseudo spectral numerical methods implemented with MATLAB. The behaviour of the algae population and the boundary layers are discussed by examining the numerical results. Perturbation and asymptotic analysis is used for further analysis of the system using Maple. In the following Chapter a Nutrient Phytoplankton Zooplankton Detritus (or NPZD) model, which is a commonly used type of model in marine ecosystem modelling, is developed based on the framework of Soetaert and Herman. The model is examined under five different experimental setups (herein we mean numerical experiments) and the results are discussed. The NPZD model implemented is compared with a well-studied model in the literature. Our model can be considered somewhat simpler than other models in the literature (though it still has a much larger parameter space than the idealized model discussed in the previous Chapter). Finally we discuss future directions for research.