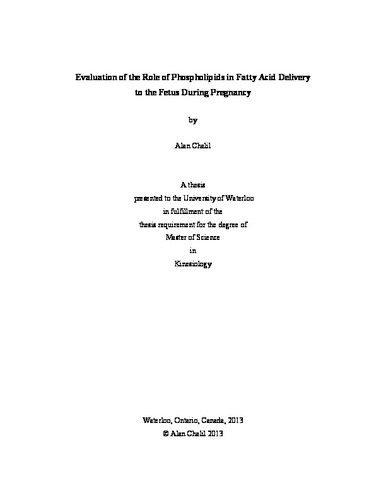 Docosahexaenoic acid (DHA) is an omega-3 highly unsaturated fatty acid that plays an important role in fetal brain development. The fetal demand for DHA appears to be met by placental transport and various maternal physiological adaptations. Estrogen, which is elevated during pregnancy, is associated with increased DHA biosynthesis, but estrogen is also implicated in the synthesis of phospholipids, specifically the regulation of phosphatidyl ethanolamine methyltransferase (PEMT) that methylates phosphatidyl ethanolamine (PE) to form phosphatidyl choline (PC). PE in various tissues is typically enriched in DHA relative to PC, but PC is the dominant phospholipid in plasma. The conversion of PE to PC by PEMT as a potential mechanism to mobilize maternal DHA to plasma for placental transport was examined in diets that mimic human fatty acid intakes with and without DHA as well as in a standard rat chow diet low in DHA. Rats were examined at baseline, day 15 and day 20 of pregnancy, and 7 days post partum. The accumulation of fatty acids into lipid fractions in maternal plasma and liver were determined with DHA in PC increasing dramatically at day 20, particularly in plasma. PEMT mRNA expression was increased at day 15 and PEMT liver protein tended to be increased at day 20 of pregnancy. In addition, increased dietary DHA appeared to be associated with increased expression of PEMT suggesting DHA hepatic concentrations may be upregulating PEMT by a substrate feed forward mechanism. Given the supporting role of PEMT in mobilizing DHA, and the extent of the increase of DHA in plasma PC during the last stages of pregnancy, other mechanisms are likely involved that remain to be elucidated.

Alan Chalil (2013). Evaluation of the Role of Phospholipids in Fatty Acid Delivery to the Fetus During Pregnancy. UWSpace. http://hdl.handle.net/10012/7663