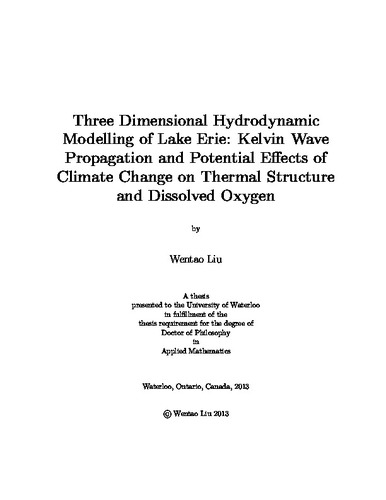 This thesis investigates physical processes in Lake Erie, a large, shallow mid-latitude lake, from two perspectives: climate change impacts on the thermal structure and dissolved oxygen concentration and small-scale eddy dynamics generated by internal Kelvin wave propagation. A three-dimensional hydrodynamic and aquatic ecological coupled model ELCOM-CAEDYM, validated by the field data collected in 2008, is first used to investigate the responses of the thermal structure and dissolved oxygen concentration in Lake Erie to potential changes in air temperature and wind speed. A new method is presented to define spatially and temporally varying regions for the epilimnion, thermocline, and hypolimnion. Four metrics are selected to quantify the characteristics of the thermal structure: mean epilimnion temperature, mean hypolimnion temperature, onset and breakdown of stratification, and thermocline depth. Exploiting the power of the three dimensional model to provide a more authentic characterization of thermal structure in such large lakes, it is shown that patterns inferred from simple isotherm dynamics, as typically done with one dimensional models, are not always accurate. In the dissolved oxygen studies similar analyses are presented. Three factors related to lake hydrodynamics have strong influences on hypolimnetic hypoxia: water temperature, stratification duration, and hypolimnion thickness. The present results show the potential for complicated and interactive effects of climate forcing on important biogeochemical processes in Lake Erie as well as other large mid-latitude lakes. Taking advantage of high performance computing, the generation of eddies when a baroclinic Kelvin wave propagates past a peninsula is studied using the MITgcm. The grid resolution can be refined from 2 km to 200 m in the parallel computing environment. With the finer resolution small-scale processes which cannot be resolved in the coarse resolution applied previously are able to be explored. The eddy dynamics are studied in detail in both an idealized lake and in Lake Erie. This work presents a first attempt at simulating small-scale hydrodynamic processes in large lakes and contributes to our understanding of how energy is moved from large scales (the scale of the basins in Lake Erie) to smaller scales (the scale of the peninsula or Point Pelee).