The Impact of Internal Solitary Waves on the Nutrient Circulation System 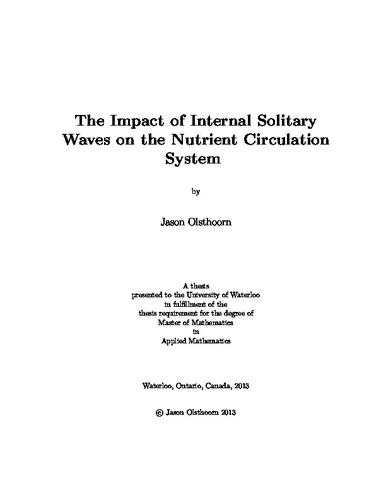 Internal waves in lakes and oceans are ubiquitous whenever a density stratification is present. These waves are relatively slow moving, can be large in extent and have long time scales. As these waves are so common, it is suspected that they play a role in recirculating nutrients throughout the water column. The various factors contributing to this recirculation are commonly referred to as the nutrient circulation system. This thesis analyses three potential mechanisms of internal wave forcing of the nutrient circulation system over a range of length scales. Namely, we discuss internal wave shear induced sediment resuspension, non-Newtonian fluid mud vortex dynamics and internal wave forced lake bottom seepage. We believe that these demonstrate the significant effect that internal waves can have on distributing nutrients throughout the water column. In conjunction, these mechanisms have the potential to be the dominant source of nutrient circulation in certain regions of lakes and oceans.