"Hold Infinity in the palm of your hand And Eternity in an hour": William Blake's Visions of Time and Space in the Light of Eastern Traditions 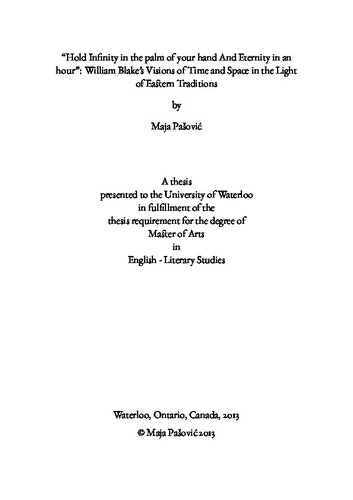 This thesis examines William Blake’s conceptions of time and space in the light of the philosophies of Hinduism and Islam. In order to perform this analysis, source material, often from rare and neglected texts, is utilized to examine Blake’s possible unorthodox influences. The analysis of influences takes a three-pronged track: literary, symbolic, and linguistic; Blake’s possible knowledge of Orientalist translations; the symbols in his poetry, prose, and paintings are analyzed; and his potential knowledge of major Orientalist languages is also examined. Once this has been examined in sufficient depth, an excavation of Blake’s views on time and space is then undertaken. This analysis of Blake’s philosophical perspectives utilizes a comparative phenomenological approach in order to show their similarity to the perspectives of the Hindu Vedanta and Ismaili Islam. Throughout this analysis, I aim to demonstrate both that Blake’s views on space are inherently mystical (space as limitless and unbound by the physical universe), and that his view on time, having a similarity to that of the Platonists, views Eternity as the one true reality.

Maja Pasovic (2013). "Hold Infinity in the palm of your hand And Eternity in an hour": William Blake's Visions of Time and Space in the Light of Eastern Traditions. UWSpace. http://hdl.handle.net/10012/7656