On the distribution of the time to ruin and related topics 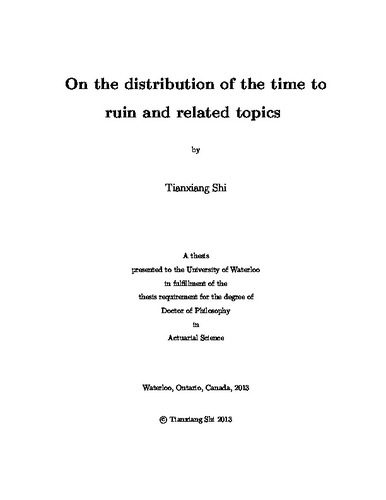 Following the introduction of the discounted penalty function by Gerber and Shiu (1998), significant progress has been made on the analysis of various ruin-related quantities in risk theory. As we know, the discounted penalty function not only provides a systematic platform to jointly analyze various quantities of interest, but also offers the convenience to extract key pieces of information from a risk management perspective. For example, by eliminating the penalty function, the Gerber-Shiu function becomes the Laplace-Stieltjes transform of the time to ruin, inversion of which results in a series expansion for the associated density of the time to ruin (see, e.g., Dickson and Willmot (2005)). In this thesis, we propose to analyze the long-standing finite-time ruin problem by incorporating the number of claims until ruin into the Gerber-Shiu analysis. As will be seen in Chapter 2, many nice analytic properties of the original Gerber-Shiu function are preserved by this generalized analytic tool. For instance, the Gerber-Shiu function still satisfies a defective renewal equation and can be generally expressed in terms of some roots of Lundberg's generalized equation in the Sparre Andersen risk model. In this thesis, we propose not only to unify previous methodologies on the study of the density of the time to ruin through the use of Lagrange's expansion theorem, but also to provide insight into the nature of the series expansion by identifying the probabilistic contribution of each term in the expansion through analysis involving the distribution of the number of claims until ruin. In Chapter 3, we study the joint generalized density of the time to ruin and the number of claims until ruin in the classical compound Poisson risk model. We also utilize an alternative approach to obtain the density of the time to ruin based on the Lagrange inversion technique introduced by Dickson and Willmot (2005). In Chapter 4, relying on the Lagrange expansion theorem for analytic inversion, the joint density of the time to ruin, the surplus immediately before ruin and the number of claims until ruin is examined in the Sparre Andersen risk model with exponential claim sizes and arbitrary interclaim times. To our knowledge, existing results on the finite-time ruin problem in the Sparre Andersen risk model typically involve an exponential assumption on either the interclaim times or the claim sizes (see, e.g., Borovkov and Dickson (2008)). Among the few exceptions, we mention Dickson and Li (2010, 2012) who analyzed the density of the time to ruin for Erlang-n interclaim times. In Chapter 5, we propose a significant breakthrough by utilizing the multivariate version of Lagrange's expansion theorem to obtain a series expansion for the density of the time to ruin under a more general distribution assumption, namely when interclaim times are distributed as a combination of n exponentials. It is worth emphasizing that this technique can also be applied to other areas of applied probability. For instance, the proposed methodology can be used to obtain the distribution of some first passage times for particular stochastic processes. As an illustration, the duration of a busy period in a queueing risk model will be examined. Interestingly, the proposed technique can also be used to analyze some first passage times for the compound Poisson processes with diffusion. In Chapter 6, we propose an extension to Kendall's identity (see, e.g., Kendall (1957)) by further examining the distribution of the number of jumps before the first passage time. We show that the main result is particularly relevant to enhance our understanding of some problems of interest, such as the finite-time ruin probability of a dual compound Poisson risk model with diffusion and pricing barrier options issued on an insurer's stock price. Another closely related quantity of interest is the so-called occupation times of the surplus process below zero (also referred to as the duration of negative surplus, see, e.g., Egidio dos Reis (1993)) or in a certain interval (see, e.g., Kolkovska et al. (2005)). Occupation times have been widely used as a contingent characteristic to develop advanced derivatives in financial mathematics. In risk theory, it can be used as an important risk management tool to examine the overall health of an insurer's business. The main subject matter of Chapter 7 is to extend the analysis of occupation times to a class of renewal risk processes. We provide explicit expressions for the duration of negative surplus and the double-barrier occupation time in terms of their Laplace-Stieltjes transform. In the process, we revisit occupation times in the content of the classical compound Poisson risk model and examine some results proposed by Kolkovska et al. (2005). Finally, some concluding remarks and discussion of future research are made in Chapter 8.