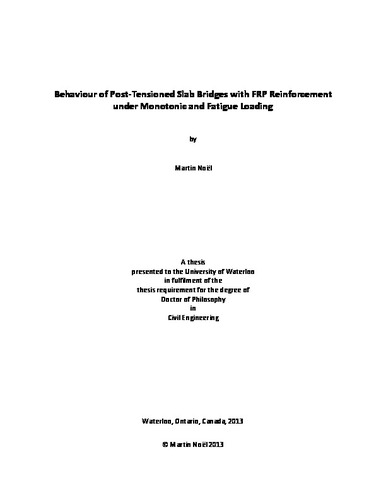 The introduction of fibre-reinforced polymers (FRPs) to the field of civil engineering has led to numerous research efforts focusing on a wide range of applications where properties such as high strength, light weight or corrosion resistance are desirable. In particular, FRP materials have been especially attractive for use as internal reinforcement in reinforced concrete (RC) structures exposed to aggressive environments due to the rapidly deteriorating infrastructure resulting from corrosion of conventional steel reinforcement. While FRPs have been successfully implemented in a variety of structural applications, little research has been conducted on the use of FRP reinforcement for short span slab bridges. Furthermore, the behaviour of FRP-RC flexural members cast with self-consolidating concrete (SCC) is largely absent from the literature. The present study investigates the behaviour of an all-FRP reinforcement system for slab bridges which combines lower cost glass FRP (GFRP) reinforcing bars with high performance carbon FRP (CFRP) prestressed tendons in SCC to produce a structure which is both cost-efficient and characterized by excellent structural performance at the serviceability, ultimate and fatigue limit states. An extensive experimental program comprised of 57 large or full-scale slab strips was conducted to investigate the effects of reinforcement type, reinforcement ratio, prestressing level and shear reinforcement type on the flexural performance of slab bridges under both monotonic and fatigue loading. The proposed reinforcement system was found to display excellent serviceability characteristics and high load capacities as well as significant deformability to allow for sufficient warning prior to failure. Lastly, the use of post-tensioned CFRP tendons limited the stresses in the GFRP reinforcing bars leading to significantly longer fatigue lives and higher fatigue strengths compared to non-prestressed slabs. Analytical models were used to predict the behaviour of the slab bridge strips at service and at ultimate. Where these models failed to accurately represent the experimental findings, simple modifications were proposed. The results from ancillary tests were also used to modify existing analytical models to predict the effects of fatigue loading on the deflection, crack width, shear resistance and flexural capacity of each of the tested slabs.