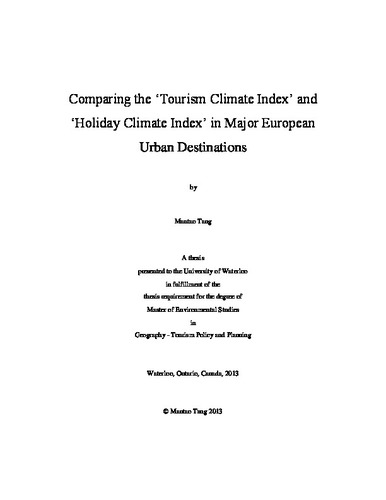 Tourism is one of the largest economic sectors globally. It is a climate sensitive sector, with climate being one of the most important attributes for a destination. The Tourism Climate Index (TCI), developed by Mieczkowski (1985), is the most widely used index for assessing a destination’s climatic suitability for general tourist activities. Major deficiencies such as the subjectivity of its rating system and component weightings have been identified in the literature, and the need to develop a new index has been identified by researchers for almost a decade. This study aims to fill the research gap by developing a new index, the Holiday Climate Index (HCI), for the purpose of overcoming the deficiencies of the TCI. The HCI was compared with the TCI in rating both current (1961-1990) and future (2010-2039, 2040-2069 and 2070-2099) climatic suitability for tourism of the 15 most visited European city destinations (London, Paris, Istanbul, Rome, Barcelona, Dublin, Amsterdam, Vienna, Madrid, Berlin, Stockholm, Warsaw, Munich, Athens and Venice). The results were also compared with monthly visitation data available for Paris to assess whether the HCI ratings more accurately represent visitation demand than the TCI. The results show that there are key differences between the HCI and TCI in rating the tourism climate suitability of the selected European city destinations, in particular in the winter months of the northern, western and eastern European city destinations where the performance of the TCI had been questioned in the literature. The comparison with leisure tourist visitation data in Paris also revealed that the ratings of the HCI were more reflective of seasonal pattern of tourist arrivals than the TCI ratings. Because the TCI has been widely applied (15 studies), these findings hold important implications for future research in assessing current and future climatic suitability for tourism.