The Implications of Sea-level Rise for Tourism in St. Lucia 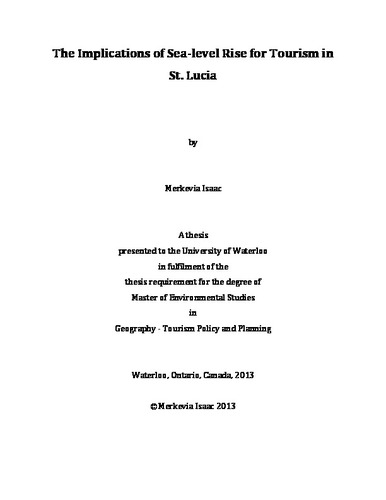 Sea-level rise is one of the most certain impacts of climate change that will have major long-term implications for tourism in the Caribbean. Sea-level rise will impact coastal tourism through inundation and erosion, damage to tourism infrastructure, (e.g., hotels/resorts, transportation) and also essential coastal resources (e.g., beaches and coral reefs). The study examines the implications of projected scenarios of sea-level rise for tourism in St. Lucia. Using geospatial analysis that integrates elevation data from satellites and digitized locations of tourism properties, transportation infrastructure (airports and cruise ports) and areas that have been zoned for future tourism development, this study identifies tourism assets that would be at risk to permanent inundation from a 1 m sea-level rise, flooding from storm surge associated with a 1/25 year storm event under 1 m sea-level rise, and exacerbated erosion associated with 1 m sea-level rise. The results indicate that while 1 m of sea-level rise would cause permanent inundation at only 4% of the 73 tourism properties assessed (impacting 7% of 4947 of rooms on the island), the additional exposure to storm surge and waves under a 1/25 year storm event would cause flooding damages at 30% of 73 tourism properties impacting 54% of rooms on the island. This study also found that erosion associated with 1 m of sea-level rise would impact 100% of the coastal resorts with inventoried beach assets. The study uses Google Earth and field observations to examine the potential of inland retreat as an adaptation strategy for coastal tourism resorts. Results indicate that 24 of 37 coastal tourism properties assessed would be unable to retreat due to current development or physical barriers, (e.g., water surfaces, protected areas). The study reviewed 16 national policies and planning documents to examine to what extent sea-level rise was considered in tourism planning and development, and found that only two policy documents referred to sea-level rise within the context of tourism. The thesis concludes with a discussion of additional research needs and recommendations for long-term planning and decision-making that are aimed at improving tourism adaptation to climate change and sea-level rise in St. Lucia.