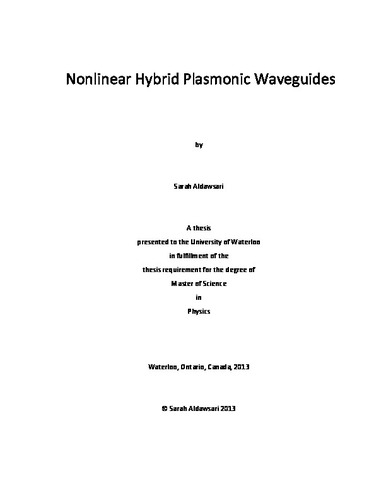 Due to the increased demand for high-operating-speed systems and ultra-compact optical devices, nanophotonic waveguides such as plasmonic waveguides have been a subject of intense interest over the past few years. The ability of plasmonic waveguides to guide light within nano-scale structures beyond the diffraction limit has driven researchers in different fields to exploit their unique features. Even though plasmonic waveguides have shown a strong mode confinement at nano-scale dimensions, they have high propagation loss. Consequently, many geometries and structures have been proposed to investigate ways to reduce this loss. The most recent type of plasmonic waveguide that shows high mode confinement and low propagation loss compared with the other types is the hybrid plasmonic waveguide (HPW). An HPW consists of a low-index dielectric layer sandwiched between a high-index dielectric material and a metal layer; the mode is predominantly confined within the low-index layer. This thesis addresses the use of HPWs for nonlinear applications such as optical switching devices based on the nonlinear phenomenon known as the Kerr effect, where the sub-wavelength dielectric layer has a pronounced nonlinear response. Using Finite Element Method analysis, the nonlinear hybrid plasmonic waveguide (NLHPW) is modeled, and the performance of the NLHPW has been investigated by using appropriate figures of merit to measure the Kerr nonlinearity of the NLHPW with and without the linear loss of the waveguide. These are shown to compare favourably with those of alternate waveguiding geometries. Moreover, the NLHPW has been shown a good balance between mode confinement and loss; small effective mode areas of 0.04 – 0.15 µm2 at a wavelength of λ=1.55 µm and relatively long propagation lengths of 30 to 160 µm can be realized, which make NLHPWs promising candidates for nonlinear applications. As a result, a nonlinear ring resonator with a radius of 1 µm based on the NLHPW is designed and investigated numerically by using frequency domain simulations. It is found that the field intensity in the ring is enhanced four times higher than the field intensity in the input waveguide, and that a nonlinear resonance shift is realized when changing the intensity of the data signal.