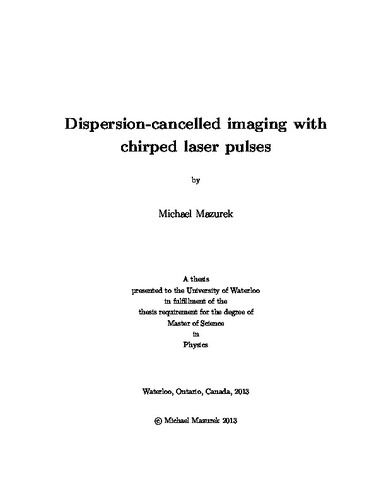 This thesis deals with chirped-pulse interferometry, an interferometric imaging technique with a resolution which is unaffected by the normally detrimental effects of sample dispersion. The thesis begins with some important background definitions and concepts. The properties of ultrafast laser pulses are discussed, and the nonlinear process of sum-frequency generation is defined. Three different interferometric imaging systems introduced, namely optical coherence tomography, quantum optical coherence tomography, and chirped-pulse interferometry. Understanding the first two techniques is key to realizing the benefits provided by the third. In the first experiment a chirped-pulse interferometer is used to image the cells of an onion. This is the first time that a dispersion-cancelled technique has been used to image the interior structure of a biological sample. Laser pulses centred on 810 nm with 90 nm full-width at half-maximum bandwidth are chirped with a spatial light modulator in a 4f-system to create a superposition of frequency-anticorrelated pulses. The chirped pulses are sent into a cross-correlator with a sample of onion in one arm. The cellular structure of the onion is imaged to a depth of 0.5 mm with a resolution of 3.2 ± 0.6 μm. The introduction of 132 fs² of quadratic dispersion in front of the sample does not affect the resolution of the image. A three-dimensional image of the sample's internal structure is created. The second experiment uses a nonlinear chirping function to produce a narrower interference signal in a chirped-pulse interferometer than that given by linearly-chirped pulses; this competes with the inherently narrower signal seen in quantum optical coherence tomography systems. The nonlinear chirping function theoretically narrows the interference signal by 30%, matching the width of the quantum signal. Experimentally, a narrowing of 17% was observed. The nonlinear chirping function was shown to cancel the 132 fs² of unbalanced quadratic dispersion as effectively as the linear function. One of the main sources of background noise in a chirped-pulse interferometer is a narrow-band component of sum-frequency generated light from the interferometer's intense reference beam. This background is at the same frequency and has the same bandwidth as the signal. A third experiment is proposed in which the light in the sample and reference arms of the interferometer is chirped independently. If the light in both arms is a superposition of frequency-anticorrelated pulses with different average frequencies the interferometer should still be dispersion-cancelling, but the narrowband background will shift spectrally from the signal.