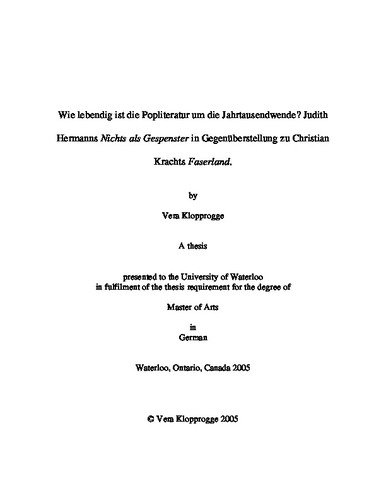 The focus of this master?s thesis is on determining whether Judith Hermann?s book of collected short stories, <em>Nichts als Gespenster</em> (2003) can be assigned to the so-called category <em>Popliteratur</em> which had its climax in the 1990?s, or whether it advances this genre by focusing on new perspectives. To show this, Hermann?s short stories are compared with Christian Kracht?s <em>Faserland</em> (1995), which is a prime example of a pop-novel at the end of the last century. Thomas Jung?s criteria for <em>Popliteratur</em> serve as a methodology for the textual analysis. <br /><br /> In the first part of this thesis <em>Popliteratur</em> as literary phenomenon is introduced. In addition to a definition and its history from the 1960?s till nowadays, the focus is on <em>Popliteratur</em> of the 1990?s and its authors who do not just write but stage themselves in the media and in public. Furthermore from this, the existence of <em>Popliteratur</em> in the 21st century is discussed and categories of how it appears in new literary forms, e. g. ?Generation Golf? and ?Zweite Generation Pop?. This is followed by a consideration of how Popliteratur is assessed in literary studies and literary criticism. <br ><br /> In the second part of this thesis, Christian Kracht and Judith Hermann are introduced, followed by a comparison of <em>Faserland</em> and <em>Nichts als Gespenster</em> from the point of view of Jung?s criteria for <em>Popliteratur</em>, namely its topics, its language, narrative technique, construction of identity and its target group of readers. After the textual analysis, the question whether Judith Hermann?s work can be assigned to <em>Popliteratur</em> or whether she transforms this genre will be answered. <br ><br /> My conclusions are that Hermann advances <em>Popliteratur</em> in the 21st century by focusing on melancholia and self-reflexion more than on the provocation that was more typical of earlier <em>Popliteratur</em>.